Brett Kavanaugh tries his filibuster trick with Sheldon Whitehouse -- and gets humiliated: ‘I get to ask the questions’ 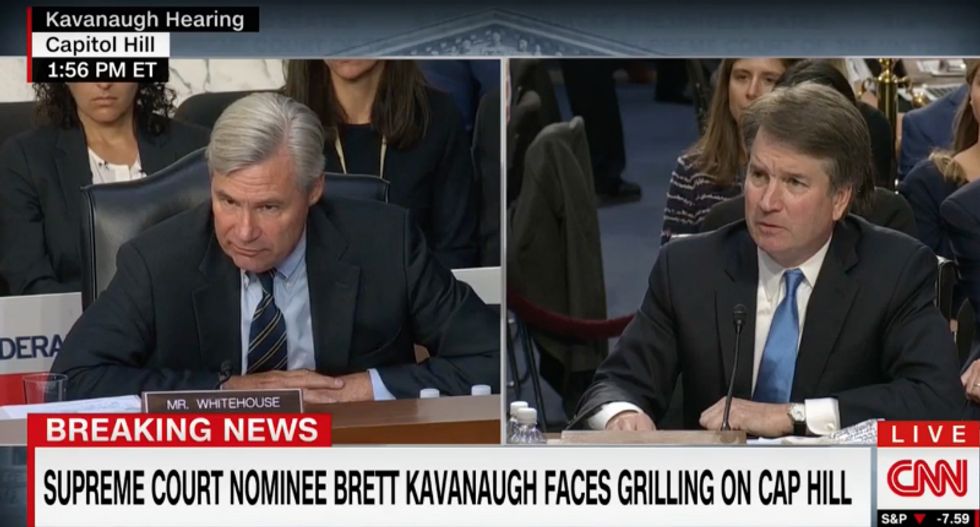 Supreme Court nominee Brett Kavanaugh tried unsuccessfully to filibuster Senator Sheldon Whitehouse (D-RI) when the senator tried to put the judge on record about upholding a key provision of the Affordable Care Act.

"In my office, you told me that you could provide no assurance to me that you would uphold a statute requiring insurance companies to provide coverage for pre-existing medical conditions," Whitehouse asked. "Is that still true here in public?"

"It's important to understand the principle at play here," began Kavanaugh, but Whitehouse cut him off.

"We've talked a lot about that," the senator said curtly, and continued his line of questioning. "Is it still true today that you can give no assurance that you would uphold -- "

"Judges like to explain their decisions," Kavanaugh replied, but Whitehouse was having none of it.

Again, Kavanaugh attempted to dodge the question. Again Whitehouse shut him down. Seemingly referring to Senator Dianne Feinstein's remark about Kavanaugh "learning to filibuster", Whitehouse reminded the nominee "to be as careful with your time as you can," and demanded a yes or no answer.

Kavanaugh continued to squirm, saying "I can enhance your understanding of my answer if I explain it, I think," before appealing to the supposed ignorance of everyone else in the room.

"People who are listening and interested actually have heard you say this already," a frustrated Whitehouse interjected flatly as Kavanaugh repeated, as if by rote, his previously stated refusal to answer specific questions. "It would be inconsistent with judicial independence rooted in Article III to provide answers on cases or issues that could come before us." He also took the opportunity to compare himself to legendary Supreme Court Justice Thurgood Marshall.

"Got it. Everyone else does it so your answer is still no," Whitehouse sighed, and moved onto his next topic.