WATCH: Brett Kavanaugh said he couldn't have raped Dr. Ford because he was a 'virgin' in high school 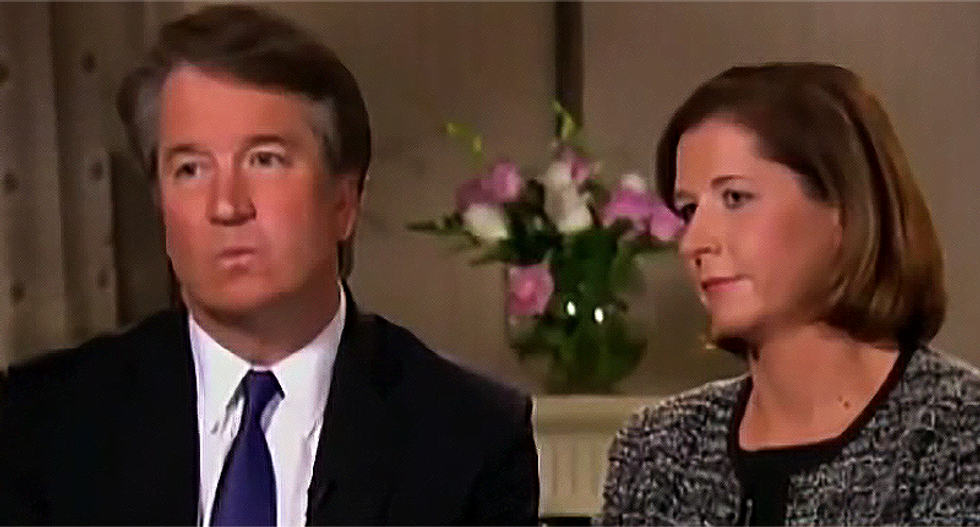 "I'm not going anywhere," Kavanaugh said during the interview.

"I won't let false accusations drive us out of this and, you know, we're looking for a fair process," Kavanaugh said. "I can be heard and defend the -- my integrity, my lifelong record. My lifelong record of promoting dignity and equality for women starting with the women who knew me when I was 14 years old."

He went on to say he wants to clear his name. Kavanaugh has said he wasn't at the party where Dr. Christine Blasey Ford said she was. Ford has never given a date of the party. When he released his schedule of that year it showed several events with "Judge."

"I've never sexually assaulted anyone. Not in high school. Not ever," he said before touting the 65 women who endorsed him. Of those women, barely a dozen have continued to support him after the allegations.

He then said that he never met Dr. Ford nor does he remember her. He spent the majority of the interview repeating over and over again "I have never sexually assaulted anyone." He also repeated he has "always treated women with dignity and respect."

Kavanaugh's wife called the process difficult and more so than she anticipated. She said that she knows his heart and it's hard for her to believe.

"Our faith is strong and we know we're on the right path," she said, sitting next to her husband.

Approval ratings for Kavanaugh dipped down 5 percent to 40 percent in less than one month. Those poll numbers were released before two new accusers coming forward.

When it came to Deborah Ramirez, Kavanaugh denied it and said that if he had it would have been the talk of campus. In fact, The New Yorker said that there have been extensive conversations on groups and listservs where classmates wondered when this story would become public.

Senate Leader Mitch McConnell blamed Democrats in a floor speech Monday, claiming they're trying to obstruct the nomination. As a point of fact, the Republicans are in the majority and could pass the Kavanaugh nomination with or without the hearing for Dr. Ford. However, the election is a mere 42 days away, and Republicans are suffering significantly with the women's vote.

Voting to confirm Kavanaugh may hurt Republican men stuck in challenging elections. Republican women like Sen. Lisa Murkowski (R-AK) and Sen. Susan Collins (R-ME) stand the chance that they'll anger their constituents with support for Kavanaugh. For Murkowski, the Alaska Native community was critical to her election and Kavanaugh has historically not supported Native rights in court decisions. Collins has been a consistent vote for women, despite her party's opposition to feminist policies. With accusations of sexual harassment and assault, Collins might lose support in her state.

Kavanaugh said while in high school he spent most of his time going to church, working on charitable projects as well as academics and sports. He confessed there was a lot of drinking in high school, but he never confessed to drinking

He also said that he was a virgin throughout high school. Dr. Ford said she narrowly escaped being raped, so Kavanaugh could have sexually assaulted Ford and still remain a virgin.

Watch the video with Kavanaugh and his wife below: