'Bring it on': Cory Booker taunts GOP's John Cornyn for threatening to expel him for leaking Kavanaugh docs 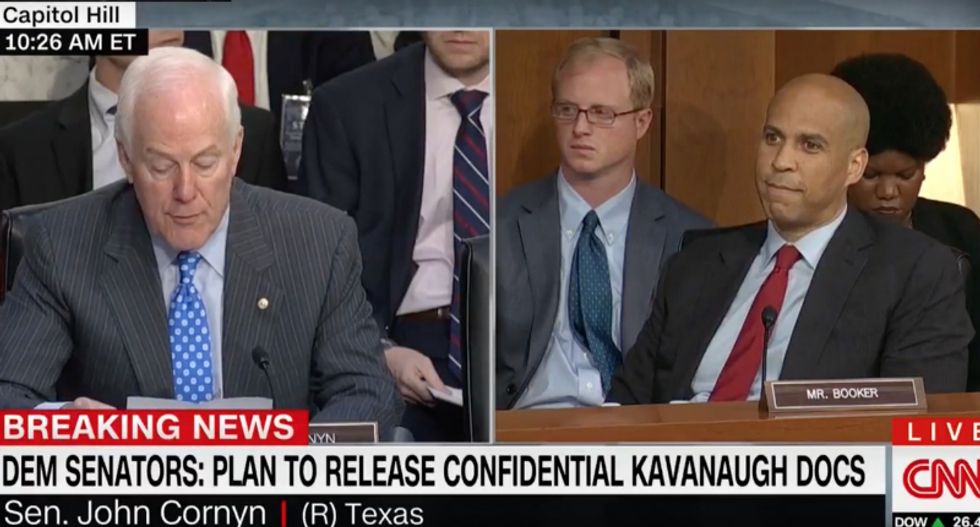 Senator John Cornyn (R-TX) got more than he bargained for Thursday, when he threatened to expel New Jersey's Corey Booker for violating Senate rules after the Democrat admitted to leaking documents that call into question Supreme Court nominee Brett Kavanaugh. Booker defended his actions and dared Cornyn to start the process.

"I will say that I did willingly violate the Chair's rule on the committee confidential process," Booker said, taking "full responsibility" because he "sincerely believe[s] the public deserves to know" Kavanaugh's record "on issues of race and the law."

"This is about the closest I will probably have to an 'I am Sparticus' moment," Booker said staring down Senator Cornyn. "There are very serious charges made against me by my colleague from Texas. I don't know if they were political bluster or sincere feelings. If what he said was sincere, there actually are Senate rules governing the behavior of senators. If he feels that I, and now my fellow colleagues who are with me, have violated those rules, if he is not a tempest in a tea pot but believes that, then bring the charges."

Practically daring Cornyn to remove him physically from the room, Booker rattled off a list of his supporters on the committee. "If somebody is going to land those charges, I hope they will follow through with me and Senator Durbin, Senator Coons, Senator Whitehouse, Senator Hirono, Senator Blumenthal, now Senator Feinstein," Booker charged. "I hope they will bring charges against us. I'm ready to accept the full responsibility for what I have done, the consequences for what I have done. I stand by the public's right to have access to this document and know this nominee's views on issues that are so profoundly important, like race and the law, torture and other issues."

A clearly agitated Cornyn began reading the relevant rule as Booker continued to taunt the senator, saying "Bring it. Bring it on." Meanwhile, Senator Richard Blumenthal (D-CT) rose in his colleague's defense, calling the entire hearing "a sham and charade."