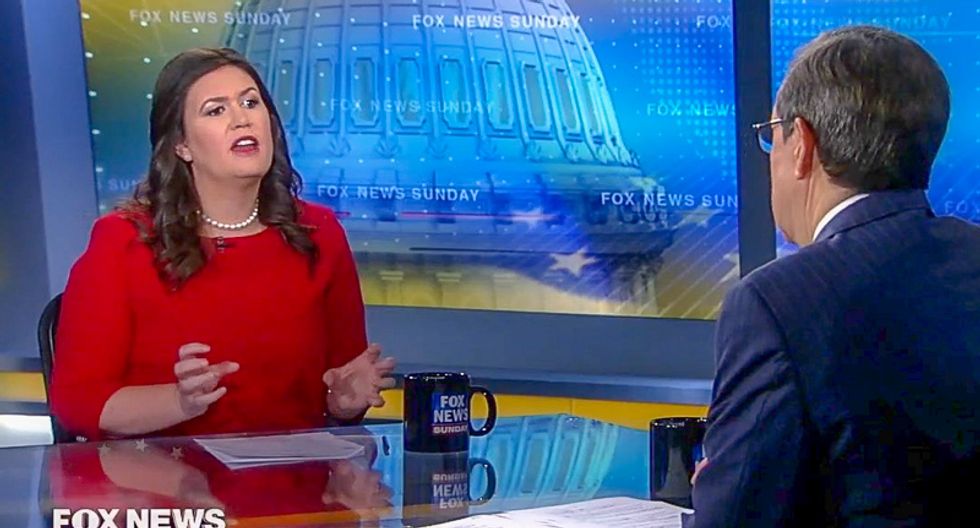 During an interview on Fox News Sunday, Wallace asked Sanders if the White House had given the FBI a list of witnesses it could interview in the Kavanaugh case that did not include Julie Swetnick or her allegations that Kavanaugh was "present" during a gang rape.

"The White House is not micromanaging this process," Sanders insisted without answering the question. "The Senate is dictating the terms, they laid out the request and we've opened it up. As you heard the president say, do what you need to do. The FBI, this is what they do and we're out of the way."

Wallace pressed Sanders on whether Swetnick was being excluded.

"Did the White House counsel give the FBI a list?" Wallace said.

"Not that I'm aware of," Sander demurred.

"But the White House is in charge of telling the FBI [what to investigate]," Wallace pointed out.

"They are going to go and they are going to provide information," Sanders insisted. "And the Senate is going to have to make a determination to either vote for Brett Kavanaugh or not."

"This can't become a fishing expedition," the White House press secretary continued. "From the very first moment [Kavanawugh was nominated], Democrats said, 'We're not going to support him, we're not going to vote for him.' And they were going to do everything within their power to fight him. We've seen that play out."

"Anybody who watched that can't ignore the fact that it evoked some emotion," Sanders replied. "But this isn't about emotion, it's about facts. And the facts are all on Brett Kavanaugh's side, certainly in all the information that came through that hearing. There was not corroboration."

"But nobody could deny that her testimony wan't compelling, that it wasn't impactful," she added. "And certainly it appears something happened to this woman. And I don't think there's anybody in America who would condone that or be okay with that. I do think the big question is, was that Brett Kavanaugh? And I think based on his testimony and the information he provided, you can easily come away and say it wasn't?"

Wallace wondered how Ford's testimony could be so compelling and yet "so wrong" about Kavanaugh.

"There was no fact-based information that supported the accusation," Sanders opined. "Equally compelling, if not more so was Brett Kavanaugh. And you point out I'm a woman, I'm also a mom. I have a daughter and I have two sons. And I think it's a very, very dangerous place and a very dangerous road for America to go down, to simply take an accusation and make it fact."

"How does the president... explain that she could be so credible and so specific in putting Kavanaugh and one of his best friends, Mark Judge, in that room?" Wallace pressed. "And be wrong about it? You say you think something happened. Not necessarily with Kavanaugh. How does he explain it?"

"I don't think any one of us can know 100 percent," Sanders remarked. "There's no doubt that her story is heartbreaking and it's heart wrenching to watch it. I've watched it a number of times."

But Sanders said that Kavanaugh's testimony was "equally heartbreaking."

SACRAMENTO, Calif. — The murder of Nancy Marie Bennallack, a 28-year-old court reporter who was brutally stabbed to death in October 1970 in her Sacramento apartment, remained a cold case for nearly 52 years. Her family and friends, including her fiancé she was supposed to marry about a month later, spent decades wondering if investigators would ever find the person who killed her. Using the same DNA genealogy techniques used to identify and capture the Golden State Killer and the NorCal Rapist, investigators at the Sacramento County Sheriff’s Office and the Sacramento County District Attorney...