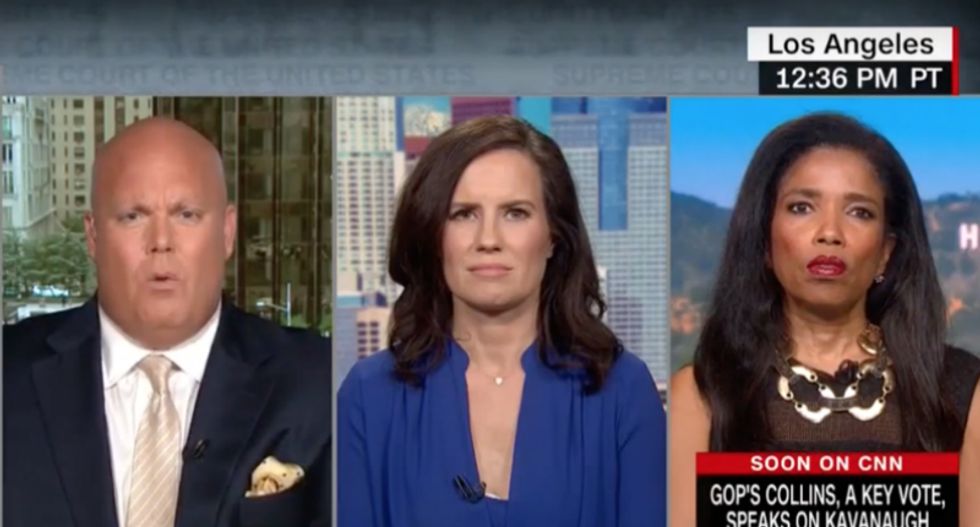 Former White House lawyer turned CNN contributor Jim Schultz got more than he bargained for Monday, when host Brooke Baldwin and fellow panel members Maeve Reston and Areva Martin took issue with his effort to smear the motives of Christine Blasey Ford. Ford is the college professor who has accused President Trump's Supreme Court nominee Brett Kavanaugh of attempting to sexually assault her at a high school party in the 1980s.

After Martin called out Senator Orrin Hatch's comments in defense of Kavanaugh- the Utah Republican has said he believes Ms. Ford is "mistaken" about who assaulted her- as an effort "to poke holes and undermine her credibility before she's been given a chance to come forward and tell her story to the American people," Schultz said the real problem was that "the process" hadn't been followed.

"What process is there when you are a woman who suffered sexual and physical assault, allegedly," Baldwin objected, "who is all of a sudden realizing this past summer that the person she says assaulted her is the guy who could be the next justice on the U.S. Supreme Court?"

As Schultz struggled to interject, Baldwin continued, "None of us can begin to understand what that process, her own process looks like, to then have the guts to come forward and write a letter, at first anonymously, because she feared the lashing, which has begun."

Schultz responded with an attack on Democratic Senator Dianne Feinstein and praise for Ford's bravery, but Martin and Reston agreed he was "missing the point."

"But she was not ready to come forward earlier this year," responded a visibly frustrated Reston. "She went back and forth and was making up her mind about whether or not to come forward."

Schultz continued his argument about Feinstein's supposed leak of Ford's letter, which drew a heated response from Martin. "You have absolutely no basis for attacking Senator Feinstein," she shot back. "Senator Feinstein handled this matter in the most appropriate way she could, given what Dr. Ford said about how she wanted this matter handled."

As Baldwin nodded her head in agreement, Martin continued to hammer at Schultz. "You have to respect the process that victims go through," she said. "In this case she said it's her civic duty that's now compelling her to come forward something so personal, so intimate. So we have to respect her process, as well."

A chastened Schultz backed down, eventually agreeing with Martin. "We're also talking about the Court, the highest court in the land," he added. "We need someone in there that's credible -- that can credibly go into that position with a record that is unscathed."