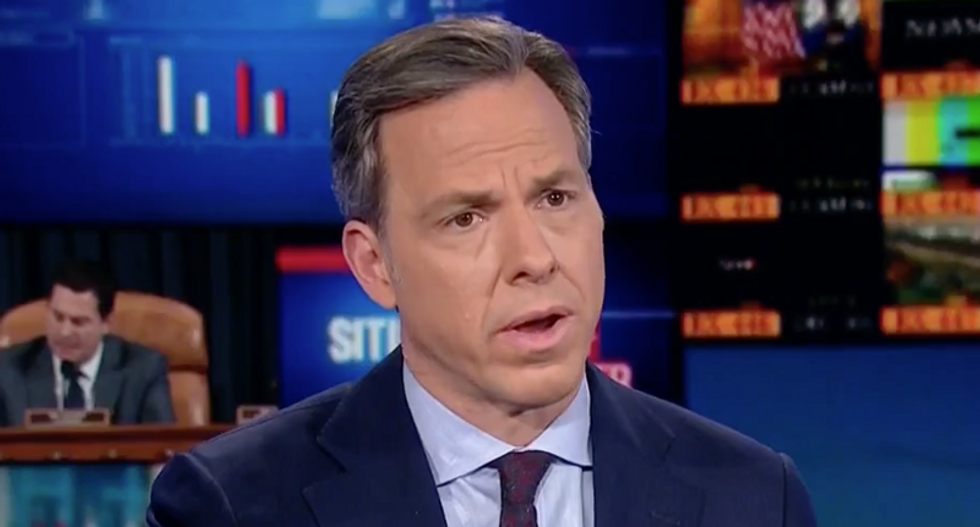 President Donald Trump began the morning claiming that the numbers were made up, "fake news" and politically motivated.

“This was done by the Democrats in order to make me look as bad as possible when I was successfully raising Billions of Dollars to help rebuild Puerto Rico,” he Tweeted. “If a person died for any reason, like old age, just add them onto the list. Bad politics. I love Puerto Rico!”

Tapper explained the actual math used to calculate those who were killed. According to him, a total number of 16,601 people died in Puerto Rico in the aftermath of the hurricanes that hit the islands. The estimations the island would typically see at that time are 13,633 deaths. The difference is how academic scientists gathered the information.

"I don't know how much he's interested in facts, to be honest," Tapper remarked, reading the president's tweets. "He doesn't know what he's talking about. He's misrepresenting the science here."

"The study is done by academics, not the Democratic Party," Bacon said. "The question for me is, like, why? This is a day where we should be focused on the people who will be affected by the hurricanes today, and it's him talking about himself a lot, and a lack of empathy and sort of a self absorption that we've seen a lot of the last two years."

Tapper argued that because Trump is attacking the number and the media is now using it as an official death toll, chances are, Trump's own supporters aren't going to believe it.

"They're watching Fox News. And over at Fox News Puerto Rico never happened," she said. " I mean, it's an alternative universe, so they are never going to hear about this."

But the real smackdown came from Republican commentator Ana Navarro.

"How stupid, how tone deaf, how surreal, how insensitive, how offensive, how offensive to the relatives of the 3,000 people who died in Puerto Rico!" she said passionately. "Just, you know, how wrong in every single wrong, morally, politically. I mean, how can this be coming from the president of the United States?"

The GOP consultant noted that the claim is also causing serious problems for Trump's own party, many of which are in a fight for their political careers. Gov. Rick Scott (R-FL) and gubernatorial candidate Ron DeSantis already came out against Trump's statement. Both of them have the full support of Trump for their candidacies.

Trump supporter David Urban tried to defend the president, saying that the president should have said that the government did their best and they intend to do better in the future.

"The president's a counterpuncher, we now that. He sees these facts and sees people blaming him for the 3,000 deaths and I think what he's trying to get across is the fact that, and Ana knows this, Puerto Rico was not in great shape," he argued. He then parroted Trump talking points that the island wasn't in great shape, to begin with, and that it wasn't the federal government's fault they couldn't get resources to people.

"Pit Bull was sending his airplane in to evacuate people!" Navarro exclaimed, implying that if a rapper could do it, surely the president of the United States could.

She went on to say that when raw data is compared to the response to Hurricane Harvey in Houston, Texas to Harvey and Irma in Puerto Rico, it is vastly different.

Urban continued to make excuses, saying that it was a catastrophe on the ground with ports crushed and chaos.

"No one is doubting that the recovery effort was incredibly difficult. What's going on is the president is doubting the death toll," Tapper schooled Urbin. "That's really what the people are objecting to."

Out of 2,000 applications for funeral assistance, the Trump government only approved 75. He then bragged about the "best job" he did, calling it "incredibly successful."

Watch the shocking debate below: