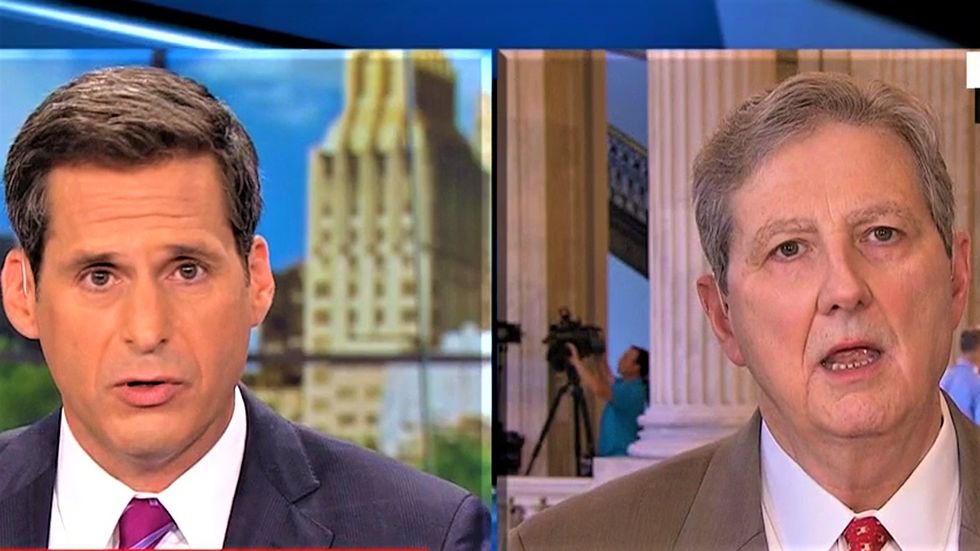 CNN's John Berman on Tuesday lit into Sen. John Kennedy (R-LA) after he repeatedly tried to dodge questions about President Donald Trump's latest attacks on the Department of Justice.

During a contentious interview, Berman repeatedly tried to get Kennedy to give his opinion on one of the president's Labor Day tweets, in which he excoriated Attorney General Jeff Sessions for allowing the DOJ to bring criminal charges against his congressional allies ahead of the 2018 midterm elections.

"Are you fine with the president saying that the Justice Department should have laid off [prosecuting alleged corrupt lawmakers] because they're Republicans?" Berman asked.

"Well, the president is entitled to his opinion," Kennedy replied.

"Oh, come on, senator!" Berman shot back. "You think it's okay that the president of the United States seems to suggest that justice should not be apolitical or impartial?"

"Well, I don't speak for the president," he said. "I think he's entitled to his own opinion. Maybe he thinks the policy ought to change. I don't know, I haven't talked to him about it."

Berman then hammered Kennedy for having a duty to be a check on the president's actions if they violate the Constitution.

"The Constitution, as we both know, gives you the power, the authority, and the responsibility, frankly, for oversight of the executive branch," Berman said.

Kennedy replied by saying that the Constitution never mentioned having oversight over the president's tweets.