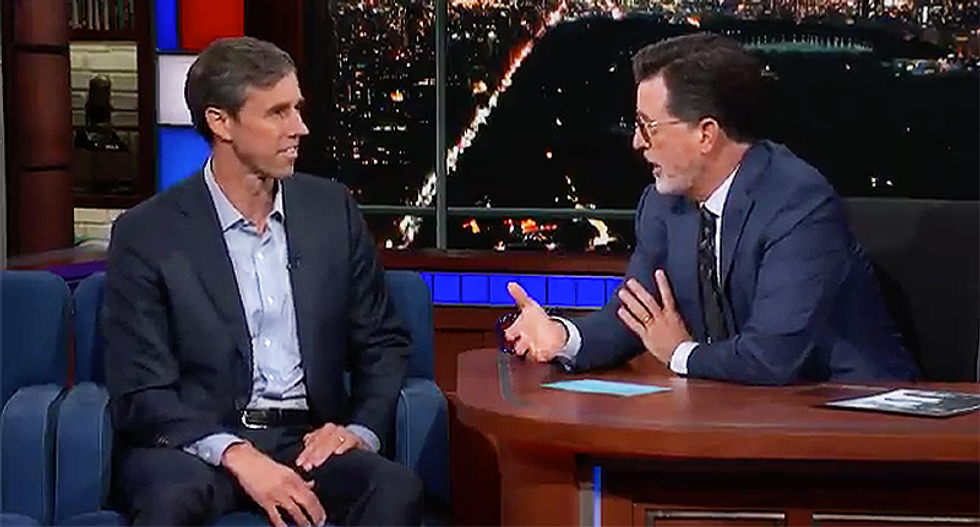 Before O'Rourke stepped out on stage, Colbert ridiculed Cruz in his opening monologue.

“Beto is running in Texas against incumbent senator, and man whose campaign staff is definitely watching this show right now, Ted Cruz," Colbert said. The CBS host mocked the GOP for begging President Donald Trump to help Cruz after the two engaging in a public feud for years.

“You know it’s bad when you need backup from a man with a 36% approval rating,” Colbert joked. “Their backup plan is a celebrity endorsement from the herpes virus.”

“Here’s how scared Ted Cruz is of Beto O’Rourke,” Colbert explained. “He bought ads on my show tonight to counter his interview.”

Cruz has tried to attack O'Rourke by releasing an old photo of the Democrat's rocker days in a band. It not only made Cruz look old and out of touch but childish and petty. Colbert showed the photo with the caption, “Maybe Beto can’t debate Ted Cruz because he already had plans"

“Yes, his plans were being smoking hot in a naughty but approachable sort of way, like your best friend’s older brother who smells like weed and listens to Radiohead,” Colbert said. “Read us your poems, Beto!”

Another Cruz ad attacking O'Rourke attacks the candidate for using the F-word, which Colbert found hilarious.

Cruz's Twitter account liked a pornographic clip of the film “Moms Bang Teens 20" posted on Twitter. Cruz tried to make jokes about it and ultimately claimed it was a "staffing issue."

When Colbert brought O'Rourke out, he attacked Trump's border wall.

O'Rourke, who hails from El Paso, said his hometown is one of the safest cities in America because it is a city of the immigrants.

"We greet one another with respect and dignity," he told Colbert.

O'Rourke then noted he hoped he and Trump could "join forces" against their mutual enemy: Cruz.

“The people of Texas are more than a match for President Trump or for politics as usual,” O'Rourke said.

“People are coming out at this moment of truth,” he continued. “They’re going to help us decide as a country, are we a nation of walls? Will we ban all Muslims or all people of one religion? Will we describe the press as the ‘enemy of the people’? Will we take kids away from their parents when they’re trying to claim asylum, fleeing from the most brutal countries in this hemisphere, if not the planet?”

"We don't need a wall" says Texas Senate candidate @BetoORourke in his conversation with @StephenAtHome on tonight'… https://t.co/InBeHi4ASn
— A Late Show (@A Late Show) 1536802392.0