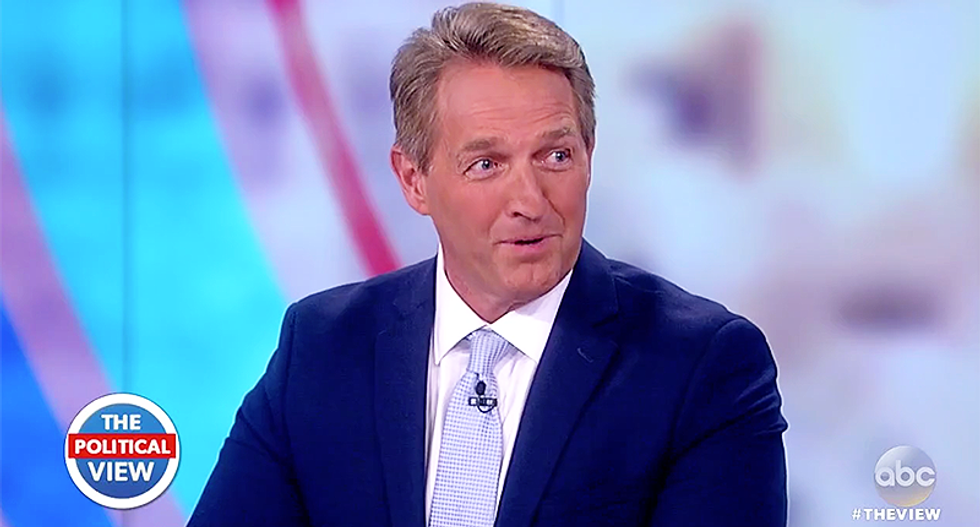 The Arizona Republican read a tweet from President Donald Trump into the record during his opening statements at the confirmation hearings.

"If you just look at what was said just yesterday by the president, I think it’s very concerning," Sen. Flake noted. “That is why a lot of people are concerned about this administration and why they want to ensure that our institutions hold."

Jennifer Rubin identified the retiring Arizona Republican as being in an "extraordinary position" as "one of the few Republicans with the capacity to slow down or deny Kavanaugh confirmation unless Constitutional protections are in place."

"In addition to the issue of the nominee’s documents, you identified the key issue: Whether the president can be allowed to pick his own judge to decide cases relevant to his criminal liability, or to the constitutionality of his actions — a judge who may have been chosen expressly for this purpose," Rubin noted.

"Nothing less than the corruption of the Supreme Court is at stake," she continued. "You and just one more Republican senator can prevent the risk of a constitutional breakdown by insisting on one of two approaches."

" The question for Kavanaugh is simple: If the president were to insist that Attorney General Jeff Sessions drop cases against two congressmen because seats would be lost by his party, would that be obstruction of justice? An impeachable offense? This is the rare case where you must insist on a definitive answer from the nominee," she charged. "If not, you will have enabled the president to subvert the Constitution."

"Now perhaps Judge Kavanaugh says he cannot in good conscience tell you definitively his view on this or a host of other serious matters (e.g., Can the president obstruct justice?)," Rubin continued. "You and another Republican then should withhold your vote for confirmation unless and until he recuses himself from matters now underway that involve the president’s possible criminal conduct and constitutional obligations in connection with the Russia probe. If he refuses, you would have no alternative but to oppose his nomination."