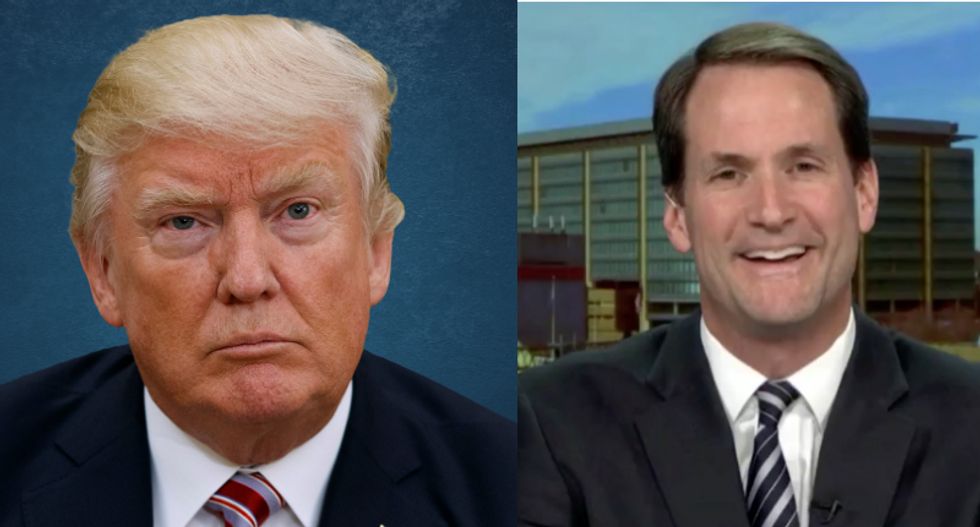 Connecticut Democrat Jim Himes, ranking member of the NSA and Cybersecurity Subcommittee of the House Permanent Select Committee on Intelligence, had harsh words for President Trump in an MSNBC appearance Monday, in which he strongly criticized any efforts by the president to fire deputy attorney general Rod Rosenstein. Rosenstein was the subject of a Friday New York Times article, which revealed the deputy attorney general joked about wearing a wire to record the president, and discussed removing him from office via the 25h Amendment.

Asked about Monday morning's "wild ride", in which Rosenstein was summoned to the White House as speculation swirled in the media as to whether he would be fired or not, the congressman did not mince words.

"My guess is that the White House realizes they are playing with fire. This is, to put it nicely, unpredictable, random, angry president," Himes said. "He's been handed an opportunity to very clearly and very publicly obstruct justice. You can imagine him demanding, firing Rosenstein and going on TV as he did with Lester Holt to say 'I finally got these guys off my back, the investigation is over.'"

"I'll point out the Mueller investigation is more popular today than it has been in a very long time," Himes said, warning the president that firing the special counsel "would be immensely divisive in an unpredictable way in the month and a half going into an election."

Himes also had nothing but disdain for his Republican colleagues who have indicated support Mueller in the past, including Lindsey Graham, Thom Tillis, and Susan Collins, who he described collectively as "warriors of the concerned tweet."

"I'm sure the next thing they'll be up to is writing very sternly worded letters," he laughed ruefully. "When it actually comes to doing something to stand up to the president and protect the republic, none of them are ever there. Count me a pessimist there will be legislative protection for the Mueller investigation."