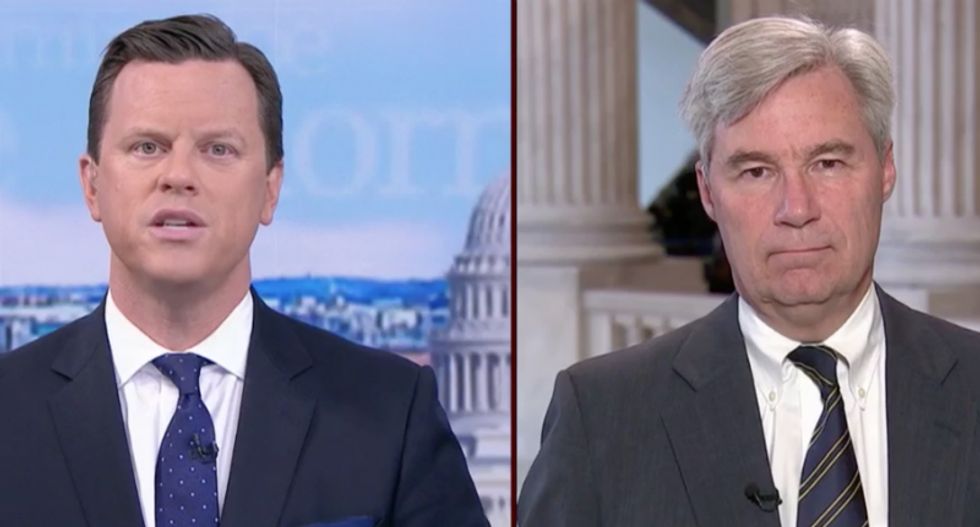 A visibly angry Sheldon Whitehouse (D-RI) slammed the Republican handling of the Kavanaugh hearings, telling the "Morning Joe" co-host Willie Geist the party was "waving the bloody partisan shirt" in an effort to ram through the embattled nominee.

Whitehouse wasn't sure if Kavanaugh would make it out of the Judiciary Committee, but he blasted his Republican counterparts for Thursday's behavior. "I think they rallied from Dr. Ford's quietly devastating testimony yesterday with that display of what somebody called tribal belligerence, waving the bloody partisan shirt and rallying everybody to the flag," Whitehouse said. "I think for their purposes it worked, and we'll see whether the American people thought that was a fair way to treat Dr. Ford and the issue of whether or not she was sexually assaulted by this man they want to put on the Supreme Court."

Whitehouse, who is himself a former U.S. Attorney, also told Geist that he believe the Republicans were not only violating Senate norms but also the legal rights of Dr. Ford by refusing to re-open the FBI background investigation into Kavanaugh.

"The most basic thing that an alleged victim of sexual assault is entitled to is a sincere and thorough investigation of her claims," Whitehouse said. "And they shut down the FBI background investigation that would have allowed that to happen. They contented themselves with things like a lawyer's letter from the accomplice that was alleged to have been assumed in the room," a reference to Kavanaugh friend Mark Judge, who Ford says was a witness to Kavanaugh's attack.

"Imagine for a second that there was a third person in the room with President Clinton and Monica Lewinsky," he added, bringing up Kavanaugh's role in the Ken Starr investigation. "Do you think that Kavanaugh would ever content himself with a lawyer's letter from that person? Of course not. You'd investigate fully, you'd cross-examine, get FBI agents out there, you'd issue subpoenas, you'd do everything to get at the truth. They've done everything they can to avoid getting to the truth."

Whitehouse pulled no punches when explaining why the Republicans seemed so reluctant to look further into the allegations. "I think it raises the prospect that things go very badly for Judge Kavanaugh once Mark Judge is under oath and once people start looking for other corroborating evidence," he said. "I think they fear it turns out badly for Kavanaugh."