Dianne Feinstein shreds Kavanaugh by reading all the allegations against him: ‘Is he the best we can do?’ 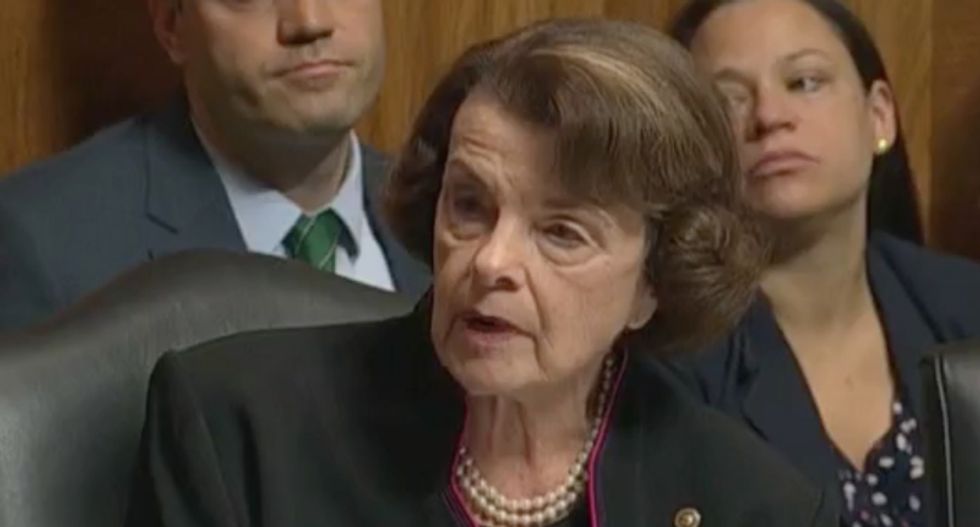 A clearly angry Senator Dianne Feinstein on Thursday slammed Judiciary Committee Chair Charles Grassley and committee Republicans for refusing to call witnesses to testify to the allegations raised by Christine Blasey Ford and multiple other women who have accused Supreme Court nominee Brett Kavanaugh of sexual assault. Defying the Chair, Feinstein read their names and allegations into the record.

"In 1991, the Senate heard from 22 witnesses over three days," Feinstein said, referring the Anita Hill hearings. "Today, while rejecting an FBI investigation, Republicans are refusing to hear testimony from any other witness." Feinstein called for the committee to subpoena Kavanaugh's longtime friend Mark Judge, "who Dr. Ford identified as being in the room when the attack took place."

Feinstein also shredded statements by GOP leaders that called into question their impartiality. "What I find most inexcusable is this rush to judgment, the unwillingness to take these kinds of allegations at face value, and look at them for what they are," she said, reminding the committee that this was nothing new for the GOP.

"In 1991, Republicans belittled Professor Hill's experience, saying, and I quote, 'it won't make a bit of difference in the outcome'," Feinstein said. "Today, our republican colleagues are saying 'this is a hiccup', 'Dr. Ford is mixed up', and declaring, 'I'll listen to the lady, but we're going to bring this to a close.'"

In clear defiance of Chairman Grassley, Feinstein then began reading the names of accusers and their allegations into the record, as well as numerous statements attesting to Judge Kavanaugh's frequent drunken episodes.

"This past Sunday, we learned about Debbie Ramirez, who was a student at Yale with Brett Kavanaugh," Feinstein began. "She was at a college party where Kavanaugh exposed himself to her. She recalls pushing him away and then seeing him laughing and pulling his pants up."

"Then yesterday, Julie Swetnick came forward," Feinstein went on, recounting her charges that Kavanaugh engaged 'in abusive and physically aggressive behavior toward girls', tried to 'remove or shift girls' clothing', and going after 'particular girls so that they could be taken advantage of'. She pointed out that all three accusers wanted the FBI to investigate, which Judiciary Republicans have resisted.

Fenstein ridiculed Kavanaugh's biography. "He's made several statements about how his focus was on school, basketball, service projects, and going to church," she said sarcastically. "He declared that he, quote, never, end quote, drank so much he couldn't remember what happened. And he has, quote, always treated women with dignity and respect, end quote."

Feinstein continued, "while he's made these declarations, more and more people have come forward, challenging his characterization of events and behaviors." She brought up Kavanaugh's freshman roommate at Yale, who described the nominee as "frequently incoherently drunk", which was when he would become "aggressive and belligerent."

She quoted Liz Swisher, a college friend of Kavanaugh's who attested to Kavanaugh's penchant for blacking out, saying "it's not credible for him to say that he has no memory lapses in the nights that he drank to excess. Perhaps most devastatingly, Feinstein quoted Lynn Brooks, another Kavanaugh clasmate who said "he's trying to paint himself as some kind of choir boy. You can't lie your way onto the supreme court, and with that statement out, he's gone too far."

Feinstein looked up, and surveyed the room. "Is Brett Kavanaugh who we want on the most prestigious court in our country," she asked rhetorically. "Is he the best we can do?