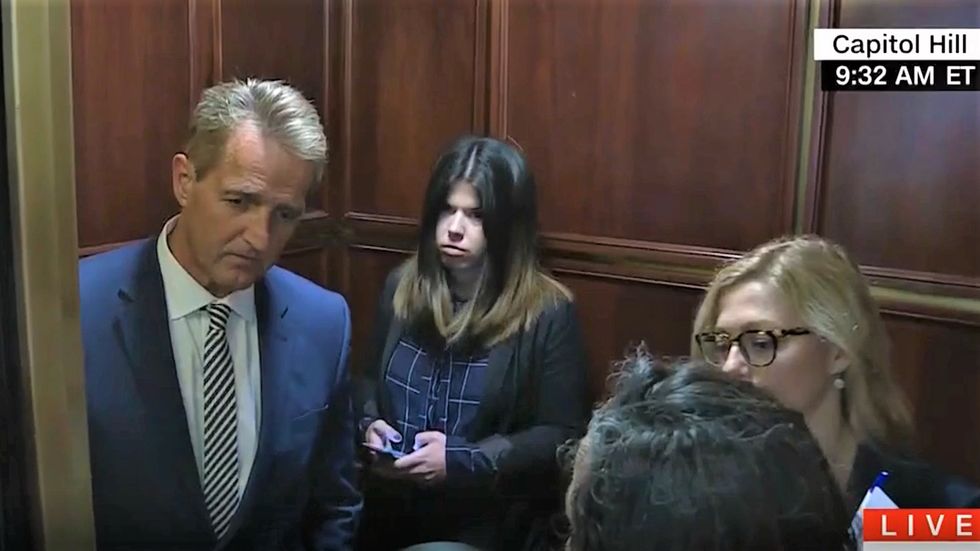 A group of furious women on Friday confronted Sen. Jeff Flake (R-AZ) in an elevator on Capitol Hill and raked him over the coals for his decision to support Supreme Court nominee Brett Kavanaugh.

While he was standing in the elevator, at least two women walked up to him and began yelling about his decision to vote for Kavanaugh, who is facing multiple allegations of sexual misconduct.

"I told you my story of sexual assault," said one of the women. "I told it because I recognize in Dr. Ford's story that she's telling the truth! What you are doing is allowing someone who actually violated a woman to sit in the Supreme Court!"

Another woman then spoke up with her own story of being assaulted.

"I was sexually assaulted and nobody believed me!" she shouted at Flake. "I didn't tell anyone, and now you're telling all women that they don't matter, that they should just stay quiet because, if they tell you what happened to them, you're going to ignore them! That's what happened to me, and that's what you're telling to all women in America... if they tell the truth, they're just going to help that man to power anyway!"

Flake kept his eyes to the ground as she spoke -- but she yelled at him and demanded his attention.

"Look at me when I'm talking to you!" she said. "You're telling me that my assault doesn't matter... Don't look away from me! Look at me and tell me that it doesn't matter what happened to me!"