'Everyone's a winner': Colbert introduces new game show called 'Are you Smarter Than the President' 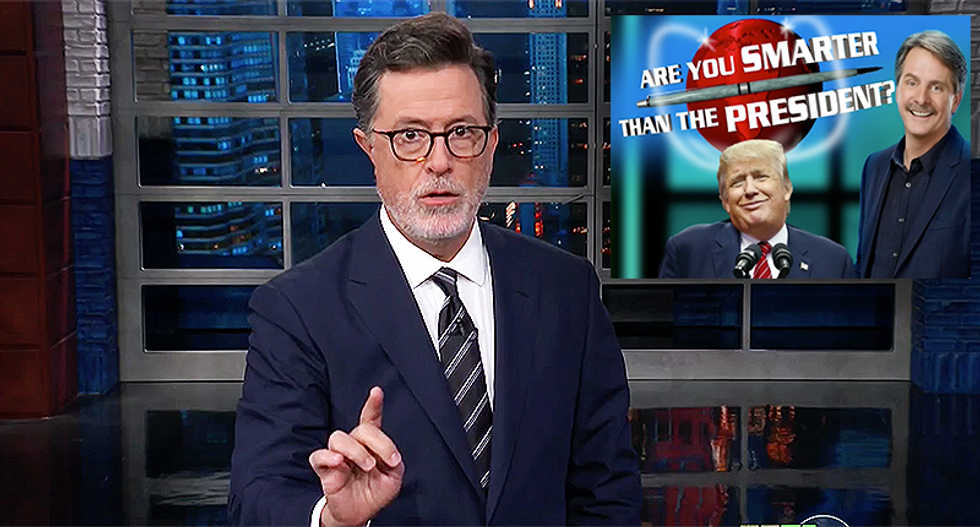 According to Colbert, an explosive new book about the Trump White House seems to come out every few minutes now. The host mocked the title of Woodward's book Fear, as something that perfectly captures the emotion Trump feels when he actually reads a book.

According to excerpts, chief of staff John Kelly really doesn't like the president much.

"I don't know why any of us are here. This is the worst job I've ever had," the book quotes Kelly saying. "He's an idiot. It's pointless to try to convince him of anything. He's gone off the rails. We're in Crazytown."

Colbert reminded the general that "Crazytown" is really all inside, specifically near the cockles of his heart.

"Kelly is not alone in his assessment," Colbert noted. "In the book, Trump's former personal lawyer, John Dowd, describes the president as 'A f*cking liar.' And, and, if Michael Cohen is to be believed, he also lies about f*cking."

At another meeting, Sec. Jim Mattis struggled to convince Trump that troops should stay in South Korea. After the conversation, Mattis told associates, "that the president acted like -- and had the understanding of -- 'a fifth- or sixth-grader,'" Colbert quoted.

He used the quote to launch a new game show "Are You Smarter Than The President." Luckily, because it's President Trump, "everyone's a winner!"