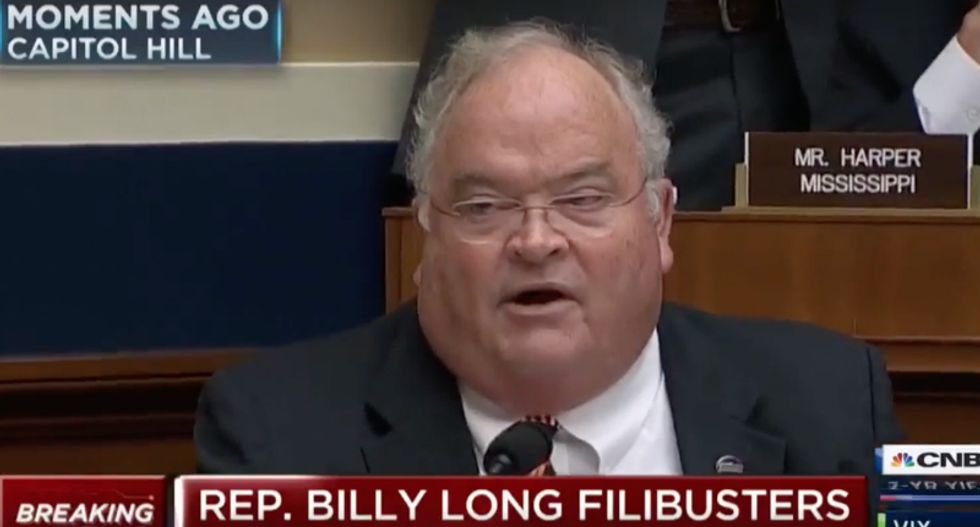 A far-right protestor was hilariously and uniquely shut down at today's House hearings into the social media giants and Russian election interference.

As a woman identified as alt-right agitator Laura Loomer stood up in the audience and shouted, "please help us, Mr. President, before it is too late because Jack Dorsey is trying to influence the election to sway the election," the voice of Representative Billy Long (R-MO), who is a certified auctioneer, suddenly rang out.

Anyone who has heard a skilled auctioneer at his or her job knows how loud they can be, and how the words emerge from the speaker's mouth like machine gun fire. As Long's nasally drawl transformed the hearings into an outright auction that seemed to be cultivating bids on her cellphone, Loomer was drowned out and escorted from the proceedings.

Just as swiftly, Mr. Long's voice dropped to a normal volume and speed as he said "I yield back," and the audience erupted in laughter.

Loomer is no stranger to controversial stunts, notoriously jumping on stage during a performance of Shakespeare's "Julius Caesar" to protest "the normalization of political violence against the right", getting banned by both Uber and Lyft for racist statements, and disrupting the Pulse nightclub mass shooting trial.