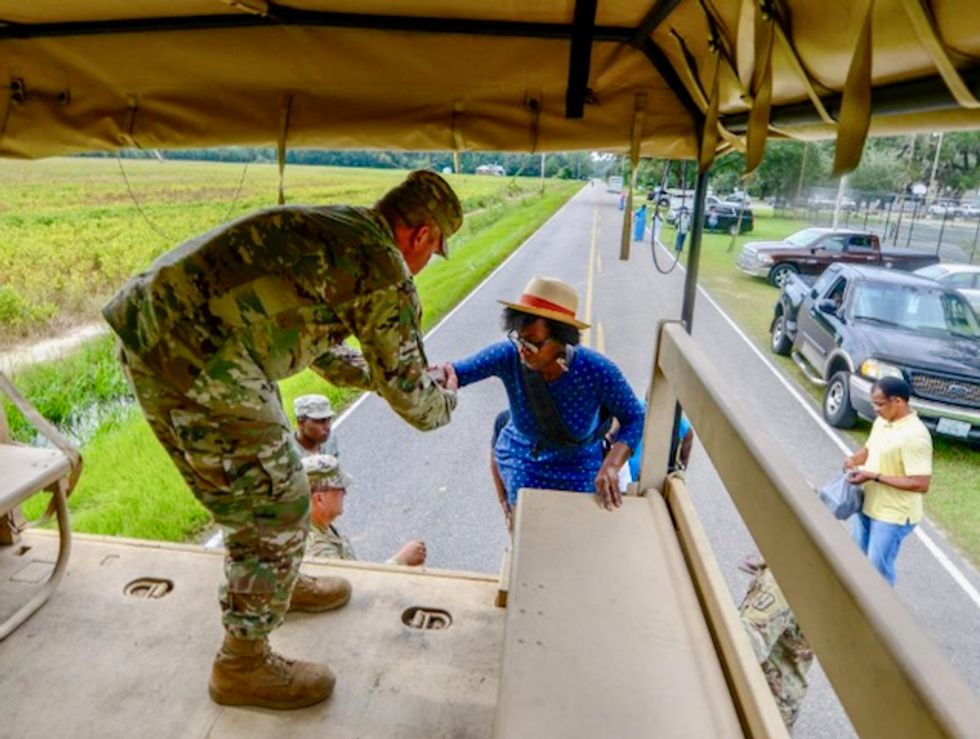 U.S. Army Brig. Gen. Jeff Jones, the South Carolina National Guard Assistant Adjutant General for Army, assists soldiers as they transport community members into flooded areas to retrieve critical items from their homes as the water continues to rise as a result of Hurricane Florence in their neighborhoods, in the town of Bucksport, South Carolina, U.S. September 24, 2018. Staff Sgt. Jorge Intriago/U.S. Army National Guard/Handout via REUTERS

Thousands of people in the Georgetown, South Carolina area were urged to leave as rivers inundated by Hurricane Florence rainwater threatened on Wednesday to submerge neighborhoods under 10 feet of water.

Georgetown, which sits at the confluence of the Waccamaw, Great Pee Dee and Sampit rivers, was largely spared the initial fury of Florence, which came ashore on Sept. 14 as a Category 1 hurricane and killed 46 people in three states.

But the port city of more than 9,000 people stands in the path of what the National Weather Service says could be significant flooding as water dumped by the storm system drains to the ocean.

Between 6,000 and 8,000 people have been exhorted to leave, but it was not clear how many had done so as of Tuesday evening, said Randy Akers, deputy public information officer for Georgetown County.

Parts of Georgetown could be submerged in up to 10 feet (3 meters) of water in the coming days as the Pee Dee and Waccamaw rivers overrun their banks, the National Weather Service said, adding that the deluge threatened to cut off highways and isolate communities.

“Be very vigilant,” Georgetown County Emergency Management Director Sam Hodge told residents on Facebook. “When you see the water start to rise, that is when it is time to take action.”

In neighboring Conway County, the Waccamaw, which was already well above flood stage on Tuesday, could inundate a coal ash pond that holds more than 200,000 tons of toxic ash, according to Santee Cooper, South Carolina’s state-owned electric and water utility.

Santee Cooper said it has removed more than 1 million tons of coal ash, which can contaminate water and harm fish and wildlife, from the site in the past few years.

The Waccamaw was forecast to crest on Thursday at 22 feet in Conway and at 21.2 feet in Georgetown, a representative with the South Carolina Emergency Management Division said.

Authorities warned residents in harm’s way with recorded telephone messages and home visits. The county opened two emergency shelters on Monday, and hotels in nearby Myrtle Beach were offering discounts to evacuees. Public schools were closed until further notice.

Crews worked to erect temporary dams on either side of U.S. Highway 17, the main coastal route through the area, and National Guard engineers were installing a floating bridge at Georgetown in case the highway is washed out at the river.

Insured losses from Hurricane Florence will range from $2.8 billion to $5 billion, according to RMS, a risk modeling and analytics firm.