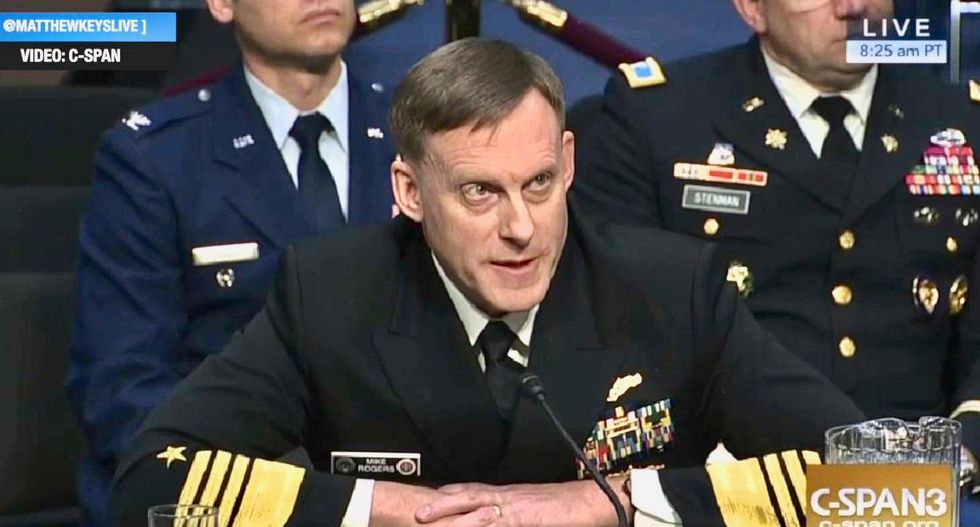 While President Donald Trump has on a handful of occasions been forced to publicly state he believes Russia attacked the U.S. election that placed him in the White House, no one actually thinks he believes that. Trump countless times has made very clear he believes the very idea of Russia hacking the U.S. is a "hoax," and the investigation into Russian interference is a "witch hunt!"

One of the few people who would know first hand exactly how Trump thinks about Russia and its attacks on America is the president's own former Director of the National Security Agency, retired Admiral Mike Rogers.

Speaking Tuesday on a panel discussion at George Mason University's Hayden Center for Intelligence, Admiral Rogers delivered a stunning revelation about just how removed from reality the Commander-in-Chief is.

"He would often say to me, 'Mike, you know I'm in a different place' on Russian hacking," Rogers told the audience.

The assessment that Russia interfered in the U.S. election is not disputable, and the general consensus of all U.S. intelligence agencies is that it happened and continues to happen.

“Sir, this isn’t about politics, it isn’t about party, it’s about a foreign state that is attempting to subvert the very tenets of our structure,” Rogers said he told President Trump.

Rogers also told the panel that he was disappointed by Trump's performance in Helsinki when he met with Russian President Vladimir Putin.

“I thought there was an opportunity there that I wish we would have taken advantage of,” he said, meaning, confronting Putin on Russia's attacks on the United States.

C-Span has the video.