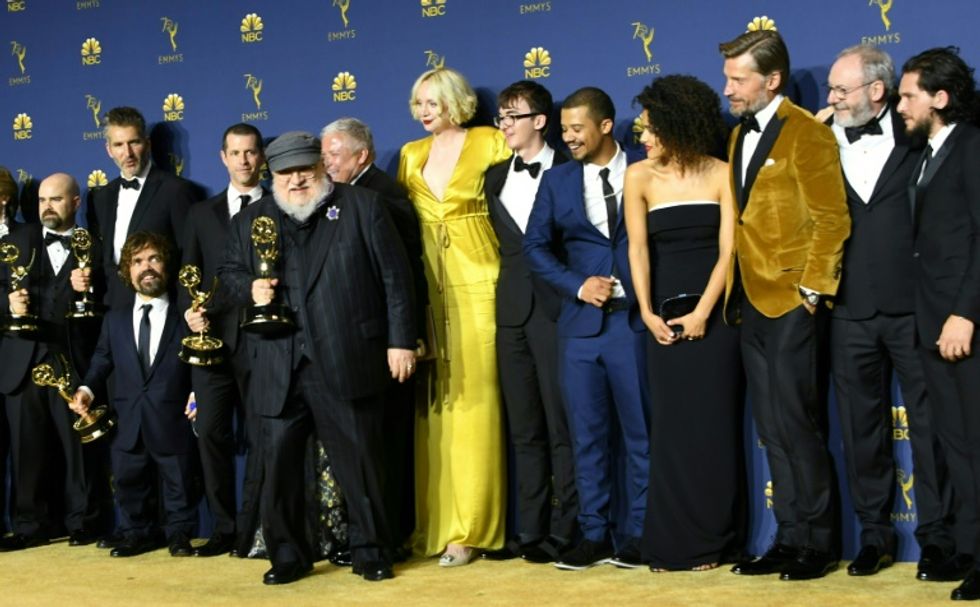 HBO's record-breaking fantasy epic "Game of Thrones" stormed back onto the Emmys stage on Monday, winning the coveted best drama series prize on a night full of surprises, including an on-air marriage proposal that stunned the audience.

The other big story of the Hollywood gala, television's answer to the Oscars, was the huge success of "The Marvelous Mrs Maisel," Amazon's story of a 1950s housewife-turned-stand up comic, which took home eight Emmys overall, including the best comedy award.

"The Handmaid's Tale" -- last year's best drama and an early favorite for more hardware in 2018 -- went home empty-handed from the star-studded event at the Microsoft Theater, after winning three minor awards handed out a week ago.

The ceremony hosted by "Saturday Night Live" regulars Colin Jost and Michael Che took on a decidedly political hue at the start, with a barrage of edgy jokes on hot-button issues from diversity in Hollywood to #MeToo and Donald Trump.

Matthew Rhys won for best drama actor for spy thriller "The Americans," Claire Foy was named best drama actress for her portrayal of Queen Elizabeth II in "The Crown" and Henry Winkler triumphed for supporting comedy acting on "Barry."

But the coveted drama prize went to "Game of Thrones," which was ineligible for last year's Emmys, and series star Peter Dinklage took home the best supporting actor prize for his portrayal of Tyrion Lannister.

"Writing for these actors behind us is the honor of a lifetime," said the show's co-creator David Benioff.

"But we didn't invent these characters. That was George R.R. Martin. The show could not be without the mad genius of George."

"GoT" won nine Emmys this year, meaning the blood-spattered cinematic tale of noble families vying for the Iron Throne -- which returns in 2019 for an abbreviated eighth and final season -- now has 47 awards overall.

That breaks the program's own record as the most decorated fictional show since the Television Academy first handed out prizes in 1949.

"One of the things I love the most about this show... it's about a woman who is finding her voice anew," Brosnahan said.

"It's something that's happening all over the country right now. One of the most important ways that we can find and use our voices is to vote. So if you haven't already registered, do it on your cell phone right now."

The Emmys opened with a daring song-and-dance number poking fun at myriad controversies including the problem of ensuring diversity in Hollywood productions.

"We solved it!" crooned "SNL" nominees Kate McKinnon and Kenan Thompson, with back-up from pop stars John Legend and Ricky Martin -- and even RuPaul.

They then yielded the stage to Jost and Che -- who let the zingers fly.

"This year, the audience is allowed to drink in their seats. Hope you're excited about that -- because the one thing Hollywood needs right now is a bunch of people losing their inhibitions at a work function," Jost said, in a reference to #MeToo.

AFP / Robyn BECKGlenn Weiss (L), winner of the Emmy for best directing of a variety special for 'The Oscars,' proposes to Jan Svendsen onstage during the ceremony

Looking to boost audience ratings, Emmys organizers said they were hoping to shake up the broadcast -- and indeed they did, intentionally and unintentionally.

A surprise marriage proposal from Emmy-winning director Glenn Weiss won over the audience -- and the internet.

As Weiss accepted his award for directing the Oscars, he asked Jan Svendsen, who was sitting in the audience, to marry him.

"You wonder why I don't like to call you my girlfriend? Because I want to call you my wife," he added to cheers, applause and a few teary-eyed actors in the audience.

Svendsen then joined Weiss on stage as the director got on one knee and formally proposed.

The moment was especially poignant as Weiss revealed his mother had recently passed away -- and offered Svendsen the ring his father had given his mom.

Other big winners included FX's "The Assassination of Gianni Versace," which won Emmys for best limited series and an acting prize for Darren Criss, who earned rave reviews for his dark turn as the designer's killer Andrew Cunanan.

Thandie Newton won the best supporting actress in a drama statuette for her work on HBO's futuristic western "Westworld."

"I don't even believe in God but I'm going to thank her tonight," Newton quipped.

In the emerging battle of traditional networks vs new platforms, streaming giant Netflix and HBO ended in a dead heat at the top -- at 23 Emmys each.

Stay tuned for the next episode in that duel... at next year's Emmys.