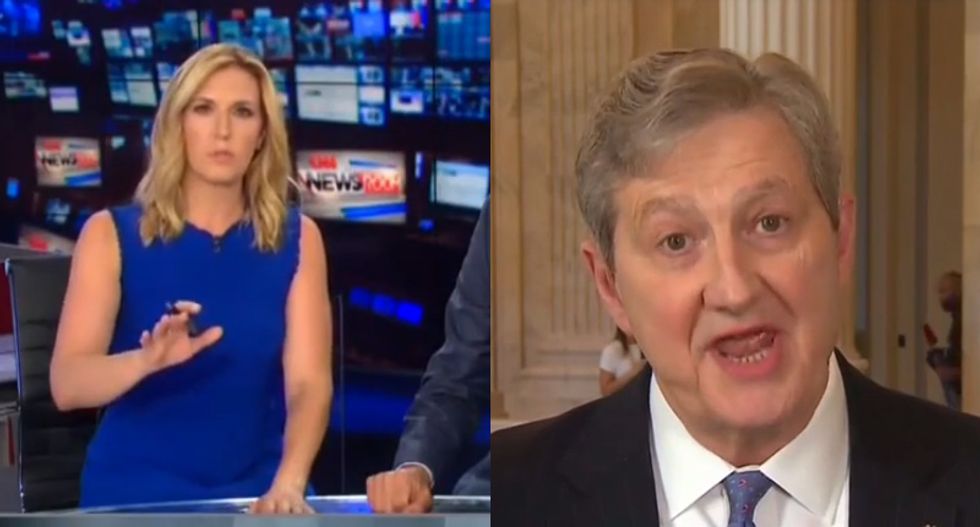 In the fiery exchange Wednesday, Kennedy repeatedly berated Harlow for pressing him on the subject of an FBI investigation into Ford’s allegations. Kennedy dodged the question, originally asked by Sciutto, by saying he doesn’t “have the information” necessary to request the FBI investigate her allegations further.

After making a false claim about Ford’s legal representation, Harlow interjected to set the record straight.

“She has a—excuse me, senator,” Harlow said. “Just to jump in, she has a team of attorneys. Katz is one we first heard from. Then we heard from one of her colleagues, I believe it is the same law firm. But I'm wondering. What doesn't seem germane—"

"Can I make my third point?” Kennedy asked.

“Jim’s question is, can the FBI investigate?” Harlow repeated.

“I heard it,” Kennedy shot back. "Let me make my third point. My third point is that as a United States senator, and I think we're all in this, in this situation, all 100 of us, you have got to have some evidence, some facts.”

“So here's what we do—“ Harlow replied, presumably to lay out the facts, as a journalist is wont to do.

“Your third one is salient and you said there has to be facts,” Harlow contested. “ just want to know for our viewers the facts that the Washington Post reported.”

Harlow then briefly laid out the facts, prompting Kennedy to ask, “can I talk now?”

“Oh, okay. I need to see the facts,” Kennedy repeated before launching into a speech about how he trust the media but Dr. Ford needs to testify on the committee’s timeline.

“I really want to get to Jim's important question,” Harlow said after Kennedy ended his soliloquy.

“Should the FBI have a role?” Scuitto jumped in. “As you know, senator Kennedy, the FBI can investigate this if the president asks them to. And there is precedent during the Anita hill investigation. President George Bush, a Republican, ordered the FBI to investigate her allegations at the time. They did so in three days and then reported back to the White House. Why isn't that a reasonable step for this president to take in light of how important this nomination is and then of course it is a lifetime appointment to the Court?”

“That’s a fair question,” Kennedy admitted before claiming he doesn’t “have the information to make that decision” and needs to speak with Dr. Ford first. Kennedy then again insisted that he trusts and respects the media.

“But with all due respect, I've got to make an important decision here, and I'd like to hear from Dr. Ford and see some evidence,” Kennedy insisted.

“And you do,” Harlow replied. “You have to make a decision so important to the American people and future generations of American citizens that we are very interested in whether or not you believe there should be an FBI or an independent body investigation, a nonpartisan investigation. Are you comfortable voting without that, yes or no?”

“No,” Kennedy said. “I want to have a hearing Monday.”

“So that's not my question,” Harlow replied. “So you want to have a hearing Monday. I think it begs the question of what is the priority of the Senate Judiciary Committee? Is it to have a hearing and a vote on the nomination of Judge Kavanaugh before the Supreme Court term starts in October or is it to find out what the truth is? And to do that, to have an investigation as Jim noted we saw in '91 with Anita Hill. What's the priority of the committee?”

Kennedy insisted the issue is the committee is “at the end of the process” and shouldn’t hold off on confirming Kavanaugh despite Ford’s allegations.