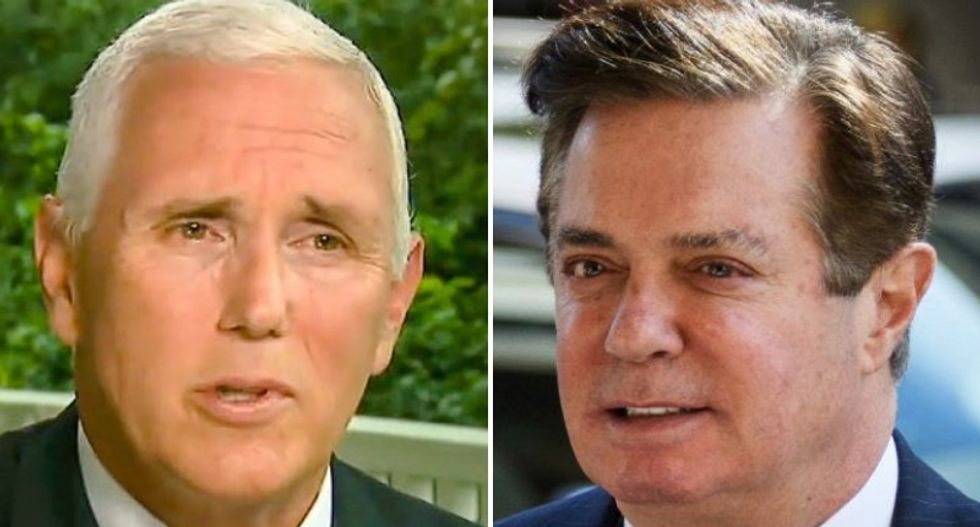 Esquire's Charles Pierce wrote that with Manafort's guilty plea and cooperation deal with special counsel Robert Mueller, Pence "has one foot in the barrel now, too."

The indicted former campaign chairman, according to reporting from CBS News in late October of 2016, was the person who moved the ex-Indiana governor into the role of Donald Trump's running mate.

According to that report, Trump had initially picked former New Jersey Gov. Chris Christie (R) as his running mate, but Manafort "had another idea in mind."

The ex-campaign chair reportedly lied to Trump and said his plane had "mechanical problems" on July 12 so that he would have to say in Indianapolis, where he arranged a breakfast between the candidate and the governor. According to a source who spoke to CBS at the time, Trump was "swayed by Pence’s aggressive pitch" and "agreed to ditch Christie and make Pence his VP the following day."

Pierce noted that Manafort "didn't do much in the short time he managed" the Trump campaign beyond "softening the Republican Party's stance on Russian thuggery in the Ukraine, and maneuvering Mike Pence into the vice presidency."

You can read the entire analysis via Esquire.