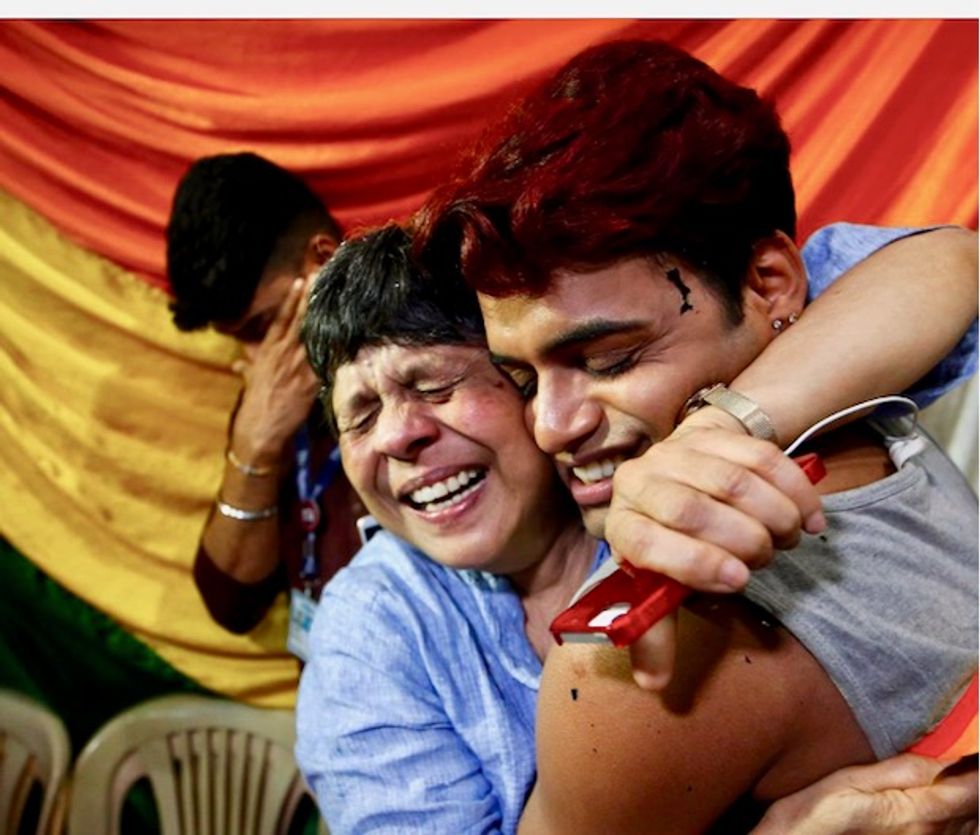 People belonging to the lesbian, gay, bisexual and transgender (LGBT) community celebrate after the Supreme Court's verdict of decriminalizing gay sex and revocation of the Section 377 law, at an NGO in Mumbai, India, September 6, 2018. REUTERS/Francis Mascarenhas

India’s top court scrapped a colonial-era ban on gay sex on Thursday in a landmark judgement that sparked celebrations across the country where gay sex had been punishable by prison for up to 10 years.

Gay sex is considered taboo by many in socially conservative India, and it was reinstated as a criminal offence in 2013 after four years of decriminalization.

A five-judge bench in India’s Supreme Court was unanimous in overturning the ban.

“Any consensual sexual relationship between two consenting adults - homosexuals, heterosexuals or lesbians - cannot be said to be unconstitutional,” said the Chief Justice of India, Dipak Misra, as he read out the judgement.

Supporters of the campaign to scrap the ban milled around the Supreme Court before the verdict and cheered the decision, hugging one another and waving rainbow flags.

Some were overcome with emotion, while others waved banners with slogans such as “Gay and Proud” and “I am who I am”. A few distributed sweets in celebration.

“I’m so excited, I have no words,” said Debottam Saha, one of the petitioners in the case.

Activists hope the scrapping of the ban will uphold the right to equality but many acknowledged that discrimination would persist.

“We are no longer criminals, (but) it will take time to change things on the ground - 20 to 30 years, maybe,” said Saha.

Balachandran Ramiah, a second petitioner, also said there was “a long road ahead when it comes to changing societal mindsets”, and stressed the importance of employers ending discrimination in workplaces.

“A number of companies up until now were unable to put these down on paper,” he said, referring to steps to end discrimination.

The law against gay sex, known as “Section 377”, was introduced during British rule more than a century-and-a-half ago.

It had prohibited “carnal intercourse against the order of nature with any man, woman or animal” - which was widely interpreted to refer to homosexual sex.

The ruling Bharatiya Janata Party had said it would support any decision by the Supreme Court but one prominent member of the party criticised the court ruling.

“This verdict could give rise to other issues such as an increase in the number of HIV cases,” member of parliament Subramanian Swamy told CNN-News18.

Shashi Tharoor, a senior member of the opposition Congress party, said “the government has no place in the bedroom”.

“Private acts between consenting adults is something which no government should have criminalized as unfortunately we have done,” he said.