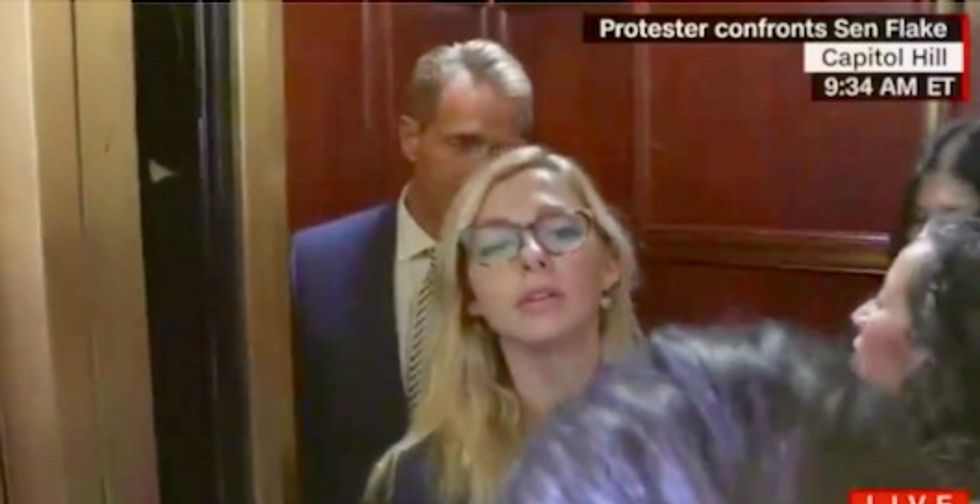 U.S Senator Jeff Flake, Republican from Arizona, was confronted by two women protesting his impending vote to support the confirmation of Judge Brett Kavanaugh to the Supreme Court. Minutes earlier he had announced he will vote for the embattled judge, accused by at least three women of sexual misconduct, to be elevated to the nation's top court.

Senator Flake refused to answer the women, and literally hid behind a young woman, presumably an aide, he was in the Senate elevator with.

“I was sexually assaulted and nobody believed me!” the protester shouted at the Arizona Republican. “I didn’t tell anyone.”

"You're telling all women that they don't matter, that they should just stay quiet because if they tell you what happened to them you are going to ignore them," she continued.

"Don't look away from me," she demanded.

Reporters asked the Senator if he would care to respond to the woman. Flake refused. After a few minutes he told the crowd that he had issued a statement on why he is supporting Judge Kavanaugh and would be saying more later, during the Committee hearing.

On social media, many labeled Flake a "coward," either for ignoring the woman or for voting for Kavanaugh, or both.

This video of Jeff Flake acting as a coward and defending a man who sexually assaulted 3 women as a women pleaded f… https://t.co/QaKIULiP7T
— QUIT FACEBOOK (@QUIT FACEBOOK) 1538141870.0