Kavanaugh attorney shames gang rape victim for not coming forward: 'You kept going to those parties' 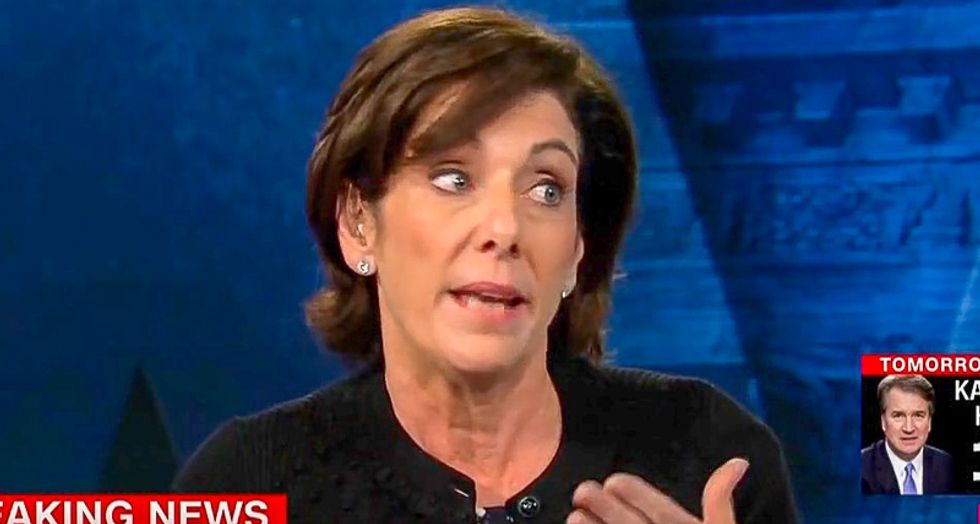 Beth Wilkinson, an attorney for Brett Kavanaugh, on Thursday suggested that a victim of gang rape was wrong for not coming forward before Kavanaugh was named as a nominee to the Supreme Court.

During an interview on CNN, host Wolf Blitzer confronted Wilkinson about the latest allegations against Kavanaugh, in which a woman named Julie Swetnick accused him of being present when she was raped by a "train" of men.

"Judge Kavanaugh doesn't know her," Wilkinson insisted. "This never happened and he said that, over and over and over again that he never engaged in that behavior."

"I'm asking why, in this process which has been so debased on both sides, why are people who have these serious allegations not going to law enforcement themselves," she continued, "and saying, 'Take a look at this'? There must be a reason, as a lawyer, that [attorney Michael Avenatti] didn't take these allegations to police himself."

Blitzer wondered why Kavanaugh had not called for Mark Judge, a friend who allegedly participated in the misconduct, to testify before the committee if the allegations are untrue.

"Mark Judge has said he doesn't want to," Wilkinson replied. "He's had to hire a lawyer. He wrote a book about his own alcohol and drug use, he was open and honest about that. And he doesn't want to become part of the circus. And how could you blame him?"

Wilkinson, however, did blame the victim for deciding to come forward now.

"When you say you went to 10 parties like that and you kept going to those parties even though that was happening," she said of Swetnick, "and you saw that supposedly happening to other girls, that is a different thing not to report. I understand why women don't report sexual assault. It's very difficult. And no one should criticize them for that."

"Really, you witnessed gang rapes and you never came forward?" Wilkinson complained. "You witnessed something like that, as a parent and a daughter of two sons, I cannot imagine not coming forward when this man was named, if that's what you witnessed. I don't understand that."