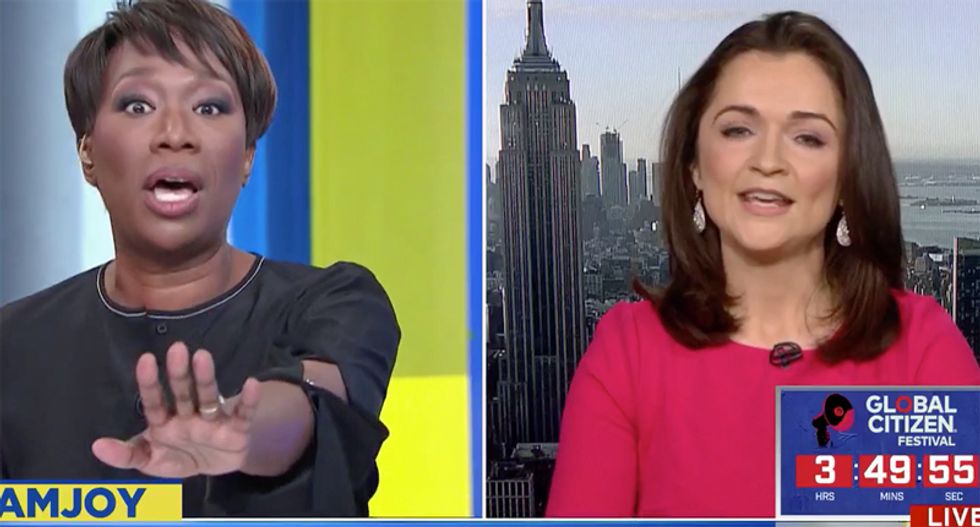 Republican confidence in Judge Brett Kavanaugh appeared diminished on Saturday as Republican commentator Carrie Sheffield launched an long-winded rant trying to defend the nomination during an appearance on MSNBC's AM Joy.

Host Joy Reid refused to go to commercial break in order to allow the extraordinary segment to continue.

"What happened in the hearing was a fundamental miscarriage of justice," Sheffield argued. "There is zero evidence of this sort of behavior."

After Sheffield claimed that, "every single supposed eyewitness has refutably denied it," Reid interrupted conservative activist.

"Hold on, that's not true," Reid noted. "I want to make sure we don't get that into the public consciousness, that is not true."

Moments later, Sheffield claimed that in 2008, Democrats made out Sen. John McCain (R-AZ), "to be the great Satan."

"Carrie is very wrong about all of it," noted MoveOn spokesperson Karine Jean-Pierre.

The MSNBC anchor then had to correct Sheffield on the nomination process for Judge Merrick Garland, who was never even given a hearing by Senate Republicans.

And Reid later had to interrupt Sheffield as for criticizing the victims who have come forward with sexual assault allegations against Judge Kavanaugh.

"We're not going to compare and say one person's response is superior to others," Reid said, laying down the rules for her show. "Everybody's response is different, everybody reacts differently."

"We're not going to shame Christine Blasey Ford for the way she handled it," Reid demanded.

"No one who performed the way he did on Thursday deserves to be even a judge," argued former Watergate prosecutor Jill Wine-Banks. "That showed a lack of judicial temperament -- I wouldn't want my case to be heard by him."

Sheffield replied that the comments by Wine-Banks were both racist and sexist.

Yet Sheffield continued lashing out.