Kavanaugh dismisses horrifying gang rape accusations: 'This is ridiculous and from the Twilight Zone' 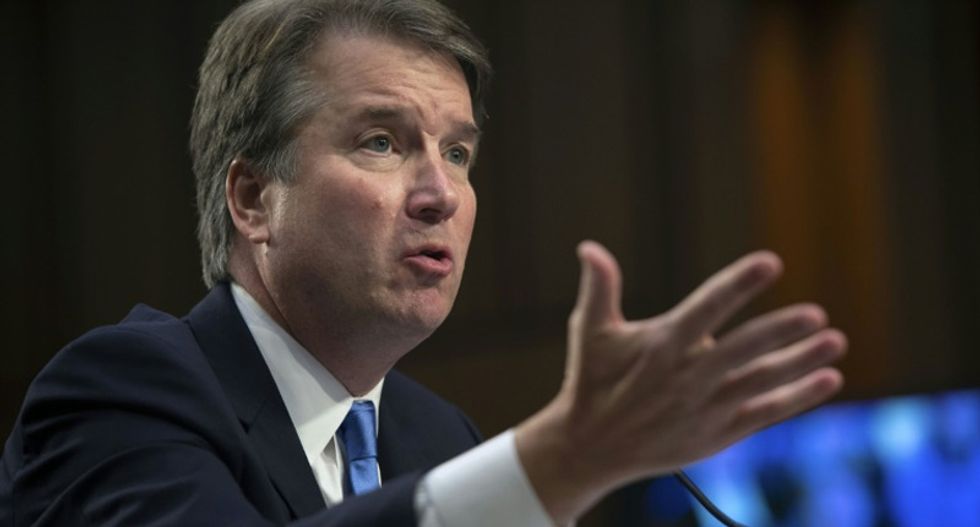 Judge Brett Kavanaugh testifies during the second day of his Senate Judiciary Committee hearing to be a US Supreme Court justice. (AFP/File / SAUL LOEB)

A new woman came forward Wednesday with explosive revelations about Brett Kavanaugh, saying she witnessed sexually abusive behavior by the Supreme Court nominee and claiming that she was gang-raped at a party he attended in the early 1980s.

Lawyer Michael Avenatti sent the allegations made by his client, Julie Swetnick, to the Senate Judiciary Committee conducting Kavanaugh's confirmation hearing and demanded an FBI investigation into the claims.

The Senate committee is scheduled to hear testimony on Thursday from another woman who accuses Kavanaugh of sexual assault and conduct a vote on his nomination on Friday but the latest revelations threaten to derail the already turbulent process.

A spokesman for the Senate Judiciary Committee said lawyers for the panel were reviewing the declaration submitted by Swetnick, who said she has worked extensively for the federal government including the Treasury Department and Internal Revenue Service.

"This is ridiculous and from the Twilight Zone," said the 53-year-old judge, in a statement issued by the White House. "I don't know who this is and this never happened."

Swetnick, in a sworn statement released by Avenatti, said she attended more than 10 parties also attended by Kavanaugh while they were high school students in the early 1980s in suburban Maryland.

She said she saw Kavanaugh behave as a "mean drunk" at the parties and witnessed the "fondling and grabbing of girls without their consent."

"I observed Brett Kavanaugh drink excessively at many of these parties and engage in abusive and physically aggressive behavior towards girls, including pressing girls against him without their consent, 'grinding' against girls, and attempting to remove or shift girls' clothing to expose private body parts," Swetnick said.

"I likewise observed him be verbally abusive towards girls by making crude sexual comments to them that were designed to demean, humiliate and embarrass them," she said.

Swetnick said Kavanaugh's claim of "innocence" and lack of sexual activity in high school was "absolutely false and a lie."

Swetnick also said that she was drugged and gang-raped at a party in approximately 1982 at which Kavanaugh was present.

She did not claim that Kavanaugh took part or was aware of her rape but she claimed that he and other boys in his circle engaged in similar behavior.

Swetnick said she had witnessed efforts by Kavanaugh to "'target' particular girls so they could be taken advantage of."

She said she had witnessed efforts by "Kavanaugh and others to cause girls to become inebriated and disoriented so they could then be 'gang raped' in a side room or bedroom by a 'train' of numerous boys.

"I have a firm recollection of seeing boys lined up outside rooms at many of these parties waiting for their 'turn' with a girl inside the room," she said.

"These boys included Mark Judge and Brett Kavanaugh," she said. Judge is a boyhood friend of Kavanaugh who has written a book describing the debauchary of his high school years.

The bombshell new claims come after two women came forward to accuse the judge of assaulting them in the 1980s, in a scandal that has tripped up what was expected to be an easy confirmation process for the conservative judge.

California university professor Christine Blasey Ford was to testify before the Senate Judiciary Committee Thursday about her accusation that Kavanaugh assaulted her at a high school party when they were both teenagers.

"I strongly believe Judge Kavanaugh should withdraw from consideration," Schumer said in a statement. "If he will not, at the very least, the hearing and vote should be postponed while the FBI investigates all of these allegations."

Kavanaugh also stands accused of exposing himself to a classmate, Deborah Ramirez, causing her to touch him without consent, during an alcohol-fueled Yale University party a few years later.

"I categorically and unequivocally deny the allegation against me by Dr. Ford," he said. "I never had any sexual or physical encounter of any kind with Dr. Ford.

"Over the past few days, other false and uncorroborated accusations have been aired," he added. "There has been a frenzy to come up with something -- anything, no matter how far-fetched or odious -- that will block a vote on my nomination.

"These are last minute smears, pure and simple," Kavanaugh said.

"I will not be intimidated into withdrawing from this process," he said. "This effort to destroy my good name will not drive me out."

Kavanaugh was handpicked by Donald Trump for the lifelong post on the Supreme Court, and has continued to enjoy the president's steadfast backing despite the allegations against him.

As Trump repeated his support for Kavanaugh on Wednesday, calling him "outstanding" and an "absolute gem," four people released affidavits claiming that Blasey Ford had told them about the alleged sexual assault prior to his nomination for the Supreme Court.