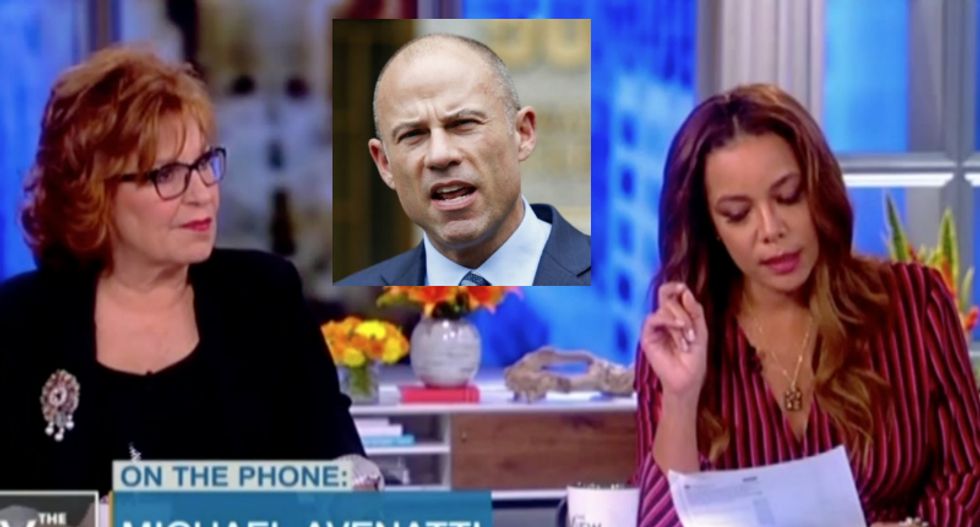 Stormy Daniels' attorney Michael Avenatti called into The View Wednesday with brand new explosive allegations levied by a new Brett Kavanaugh accuser, Julie Swetnick, who has issued a sworn testimony that the Supreme Court nominee was involved in gang rapes. Avenatti said Swetnick was prepared to testify with corroborating witnesses, and demanded the FBI intervene immediately.

Avenatti clearly came loaded for bear, telling the co-hosts Swetnick had signed a "sworn declaration under penalty of perjury" that fully detailed her experiences, that she was prepared to meet with the FBI, and was willing to take a polygraph against Mr. Kavanaugh. He also practically dared Kavanaugh's supporters to question her claims. "I'm looking forward to anyone attempting to challenge the credibility of my client because she is absolutely credible," he said, attesting to the strength of her testimony. "In fact, she has also obtained multiple security clearances issued by the U.S. government over many, many years."

Asked why his client had waited until now to make her charges, Avenatti said "she believes that the truth should be known and that this process is a search for the truth, and before someone is installed on the U.S. Supreme Court for life which is likely 30 years or more, that they should be fully vetted, and she wants the American public to know the truth about Brett Kavanaugh and about his conduct."

The lawyer also had harsh words and a warning for Republicans on the Senate Judiciary Committee. "There should be no rush to confirm this man to the U.S. Supreme Court. Delaying this matter a week or a month or slightly more than a month would be of no consequence," he said. "We need to make sure that we get this right, 100% right, before a vote in the U.S. Senate is taken on his confirmation for a lifetime potentially to the U.S. Supreme Court."

"She actually witnessed Mark Judge and Brett Kavanaugh cause girls to become inebriated and disoriented so they could be gang raped by a train of numerous boys," Sunny said, continuing to read from Swetnick's statement. "She has a firm recollection of seeing boys lined up outside rooms at many of these parties waiting for their turn with the girl inside the room. And she says those boys included Brett Kavanaugh."

Avenatti said the Republicans on the Judiciary were working hard to stifle any new information abut Kavanaugh. "There is no excuse, no excuse for the committee and for Brett Kavanaugh not calling Mark Judge to testify for the committee. This is a man that is one of the closest friends of Brett Kavanaugh at the time period at issue," he said. "And all you have to know is that they are hiding him. They are hiding Mark Judge from the American people, and I can assure you if he had positive things to say about this time period and positive things to say about Brett Kavanaugh's conduct, we would have already heard from him."