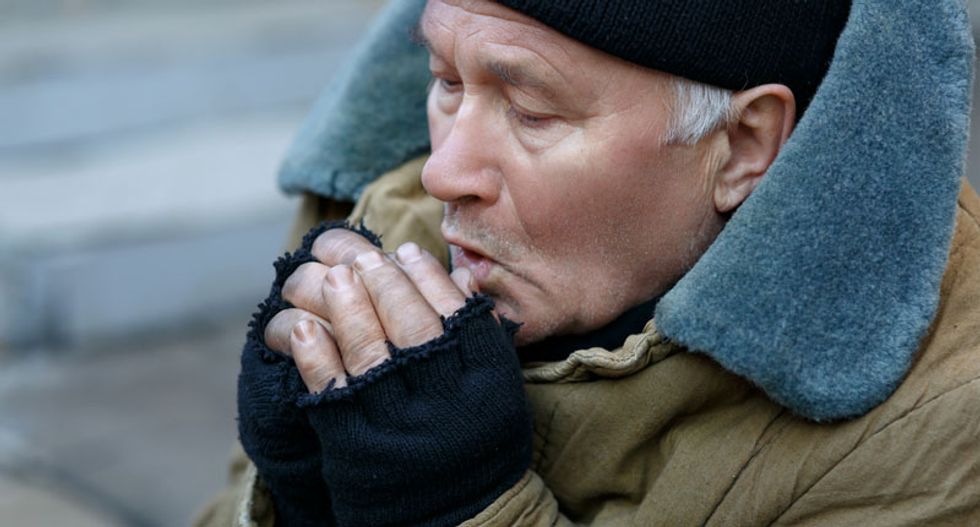 Homeless man in the cold (Shutterstock)

In the past year, Republican lawmakers have cited the Old Testament to justify policies like "zero tolerance" at the Southwest border, which resulted in the forced separation of children from their parents.

As the left-wing religion blog Religious Dispatches observes, that's hardly the only time Republicans have used the Bible to push through regressive legislation. The Farm Bill, set to expire this month, includes new onerous work requirements for recipients of food stamps.

Right now, adults between the ages of 18-49, who don't have kids have to work to get SNAP. The new legislation expands that to people between 50-59 and adults who have kids older than 6.

Conservatives tend to go to a Bible verse in Paul’s second letter to the Thessalonians: “Anyone unwilling to work should not eat.”

But as Religious Dispatches points out, it's not that simple.

"Of course, leaving aside the issue of whether we should turn to Paul in crafting legislation, the statement paints over the nuances of many people’s actual lives. Someone who’s doing a lot of unpaid labor in their community isn’t “unwilling to work,” they write.

"Likewise, a parent caring for children over six. Or someone who doesn’t have an internet connection and thus can’t log their hours in the benefit program’s database ... a policy that in principle aims to get everyone to work still sweeps away many who face more challenging conditions."

They point out that the GOP's embrace of the mindset that only people who work for wages deserve to eat is both counterproductive and ultimately racist.

"The requirement reinforces the shame of not working. It reduces workers’ bargaining power since SNAP recipients can’t stay out of the job market hoping for higher wages," the write. "And given the longstanding racist myths about those who receive public benefits, it appeases (and reinforces) white resentment toward people of color."

The writer points out that it's unlikely for the expanded work requirement to pass both houses, but argues that there are better uses of Congress's time than shaming people who are struggling to eat.