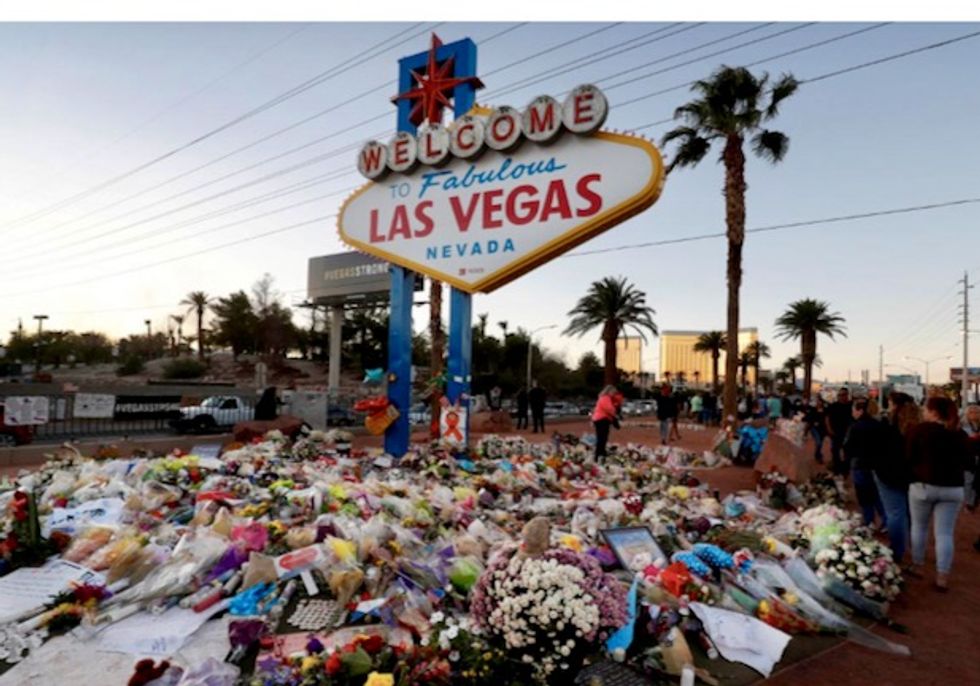 The teddy bears belonged in a child’s bedroom, the votive candles in a local church. Instead, they were among the thousands of items left by the grieving near the site of the largest mass shooting in modern American history.

They are now part of “How We Mourned,” a somber exhibit at the Clark County Museum that helps mark the first anniversary of the Oct. 1, 2017 shooting spree that killed 58 people and wounded over 800 at an outdoor festival on the Las Vegas Strip.

Stephen Paddock, 64, a retired real estate investor, poured gunfire from his 32nd-floor hotel suite into a crowd of 20,000 people attending the Route 91 Harvest festival last Oct. 1, then killed himself before police stormed his room.

In August, authorities closed their investigation without an explanation for what motivated Paddock.

After the carnage, scores of Las Vegas residents and visitors placed an eclectic array of offerings in various areas of the gambling mecca, including the traffic island that’s home to the iconic “Welcome to Fabulous Las Vegas” sign.

Museum Administrator Mark Hall-Patton said only a relatively small portion of the more than 15,000 items collected - approximately 3,000 - were displayed in the exhibit.

With 25 volunteers spending 7,000 hours sorting, photographing and cataloguing what Hall-Patton called trailerloads of items, the artifacts will eventually be placed in storage and made available for study.

“Anything that could be saved, we saved,” Hall-Patton said. “We’re not done yet.”  The exhibit is on display until Feb. 28.

The items include everything from stuffed animals, painted rocks and artificial flower bouquets to T-shirts, cowboy hats, whiskey bottles and rosaries.

Schools from as far away as Canada sent letters expressing sympathy. A group from Hawaii brought a peace lei hundreds of yards long, with 58 white crosses. Contributions have come in from around the world.

“This is an international exhibit,” Hall-Patton said, noting tourists “flew into town from overseas” just to present their offerings and pay their respects.”

Many of the items, including a large hand-painted “Vegas Strong” banner signed by hundreds of well-wishers, were created without a thought given to preservation for future generations.

“One of the challenges we have is, how are we going to preserve that?” he said. “They were looked at as a short-term statement of care.”

Sorting through the vast assortment of items from such an emotional time in the community’s history was at times difficult, he said.

“It affects everybody,” Hall-Patton said. “You walk away sometimes. But this is what we do.”