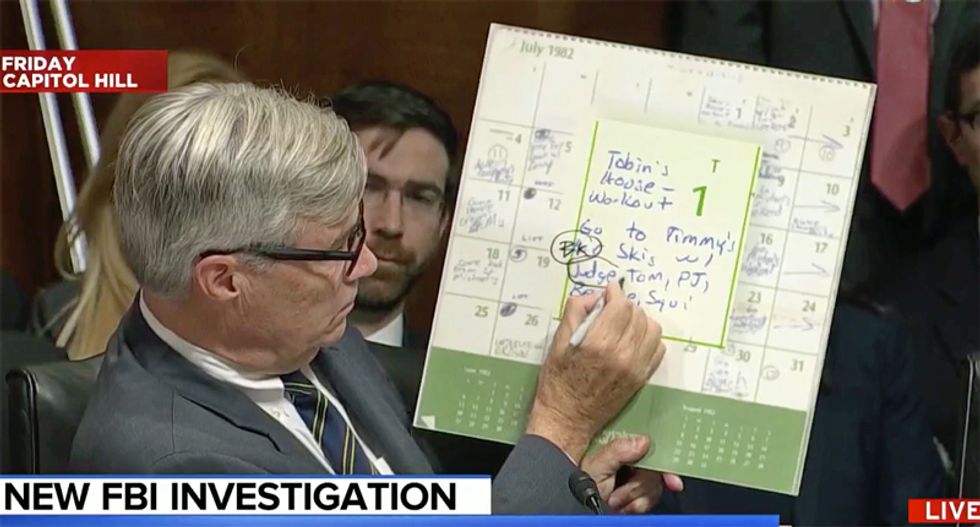 Judge Brett Kavanaugh saved his calendars from his senior year in high school, releasing multiple months to the Senate Judiciary Committee in an attempt to show he did not have a calendar entry for a party with Dr. Christine Ford, who swore under oath that she was 100 percent positive that he had attempted to rape her in 1982.

However, at Thursday's confirmation hearing, multiple participants drew down on the fact that Judge Kavanaugh's calendar entry for July 1, 1982 could be the date of the alleged sexual assault.

"You saw during the course of these hearings, when Republican senators were still using Rachel Mitchell, an outside prosecutor to ask questions, she was honing in on that date. She was getting close to it," MSNBC David Gura reported. "I noted when she got there, that's when her service to the committee seemed to end -- Republicans stopped using her at that point."

"That did seem to be the cutoff point for Rachel Mitchell, she sort of got the hook from the committee after she began to focus on Judge Kavanaugh's calendar," noted former federal prosecutor Joyce Vance. "And it seems fair to focus on his calendar, because he has held them out to be reliable."

"So this seems like a great place for the FBI to began their inquiry -- identifying the participants, looking at the likely location, seeing if it's a match with Dr. Ford's story," she explained. "They'll be able to drive her to the location, if they can identify it, and engage in all sorts of techniques designed to determine whether or not this could be the date that Dr. Ford is referring to in her testimony."

"It opens up up a Pandora's Box of problems for Brett Kavanaugh, not Dr. Ford," concluded former federal prosecutor Katie Phang.

"I think what is interesting is he put his calendar as evidence to help his own case but he actually -- he put out evidence that actually corroborates her story, which I found really surprising, because she has never seen this calendar and somehow she was able to have her version of events match the July 1st calendar," Maxwell concluded.