MSNBC's Charlie Sykes mocks Mitch McConnell's efforts to save the Senate: 'you have a disruptive force named Donald Trump' 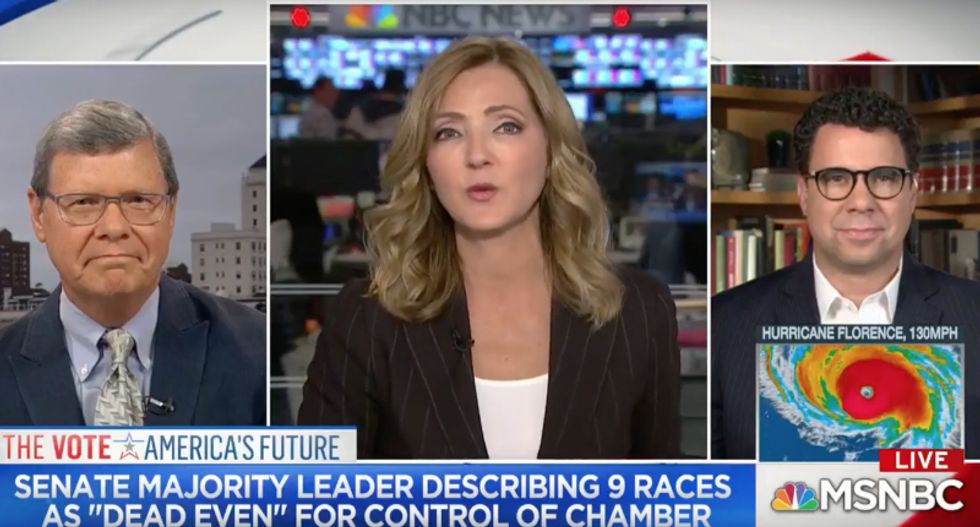 MSNBC's Charlie Sykes, a prominent never-Trump conservative, predicted an uphill battle for the GOP in the party's fight to hold the Senate, and placed the blame squarely on President Trump while mocking Mitch MccConnell.

McConnell is "sending up a flare because of the overall political environment. The president is hemorrhaging in the polls right now," Sykes told host Chris Jansing. "This election increasingly feels like it's going to be a referendum on Donald Trump."

The GOP, Sykes added, was losing independent voters to the Democrats. "That is not where Mitch McConnell wants to be at the moment."

Noting that President Trump's approval ratings are in free fall -plummeting 16 points in a single month- Jansing asked Sykes what options the Republicans had left.

Sykes laughed off McConnell's comparison of the midterms to a knife fight, saying it was more like "a jump ball."

Sykes added that party leaders need to get back on message, but were stymied, asking "how do you do it when you have a disruptive force named Donald Trump?"

Jansing asked whether the impact of Hurricane Florence could also have an impact on the election, highlighting Trump's "giving himself an A-plus for recovery work" after Hurricane Maria left nearly 3,000 American citizens dead in its aftermath. "What does it mean," she asked, "when you have something that people are so focused on and that really is a matter of life and death so close to an election?"

Bill Burton, former deputy White House press secretary under President Obama, jumped in drawing a direct comparison to GOP losses in 2006, "the last time there was a Democratic wave."

"We had another very unpopular president and we had a big hurricane that his administration failed to respond to very well," said Burton. "I don't think that Hurricane Katrina in the aftermath was the reason Democrats were able to take control of the House, but it was part of this background music that was very depressing to Republican voters."