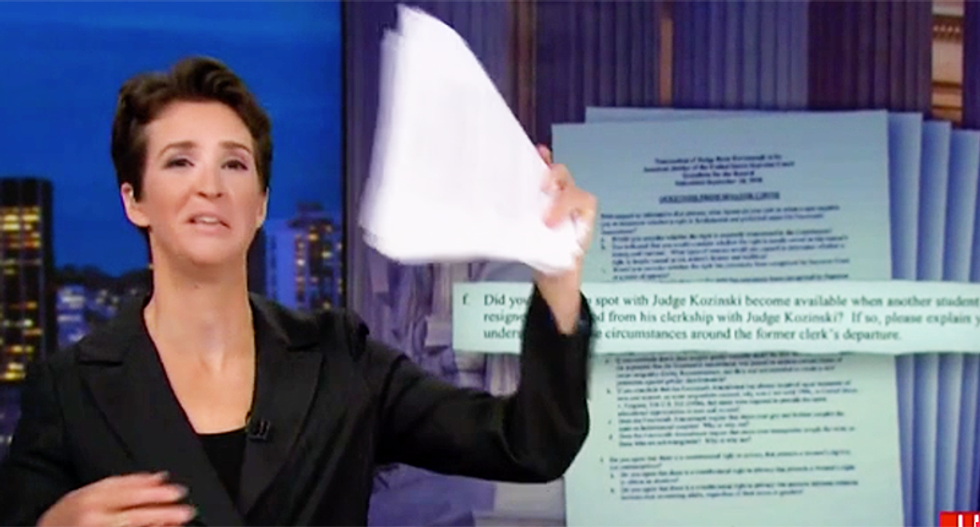 According to Maddow, the pages, and pages of answers submitted by Kavanaugh are vague and dismissive at best.

One question was about the Eureka Club, a secret group of "friends" Kavanaugh has lunch or dinner with. The scheduling for the meetings includes the word "Eureka" in the subject line of the email. That was all he disclosed. He didn't say anything about the members of the club, whether lobbyists attend or influential corporate owners searching for influence in higher courts. It's also unclear if these are right-wing funders or elected leaders. No one knows and Kavanaugh was far from transparent about it.

One thing that concerned Maddow was what seemed like gambling debts owed by Kavanaugh that could put him in a vulnerable position.

"Another line of questioning was unexplained swings in Brett Kavanaugh's finances, which led a couple of senators to ask him about gambling and debts," she continued.

Sen. Sheldon Whitehouse (D-RI) asked about an uptick in cash in Kavanaugh's bank account between 2008 and 2009 with no explanation for it.

According to Maddow, the Supreme Court nominee gave a long explanation of his finances involving "maintaining an old house."

"I have truthfully provided financial information in conjunction with my confirmation process, for most of my wife's years of paid employment she likewise has been a federal, state or government worker," Kavanaugh responded. "During that time I filed regular financial disclosure reports as required by law. As of this time my wife and I have no debts other than our home mortgage."

He listed his assets which include a house, minus the mortgage, bank account and car.

"I have not had a gambling debt or participated in fantasy leagues," he responded.

So, we still have no idea why there are wild swings in his financial history.

Maddow said she would probably be up all night reading the answers given to the senators and there is more to come.

Watch her report below: