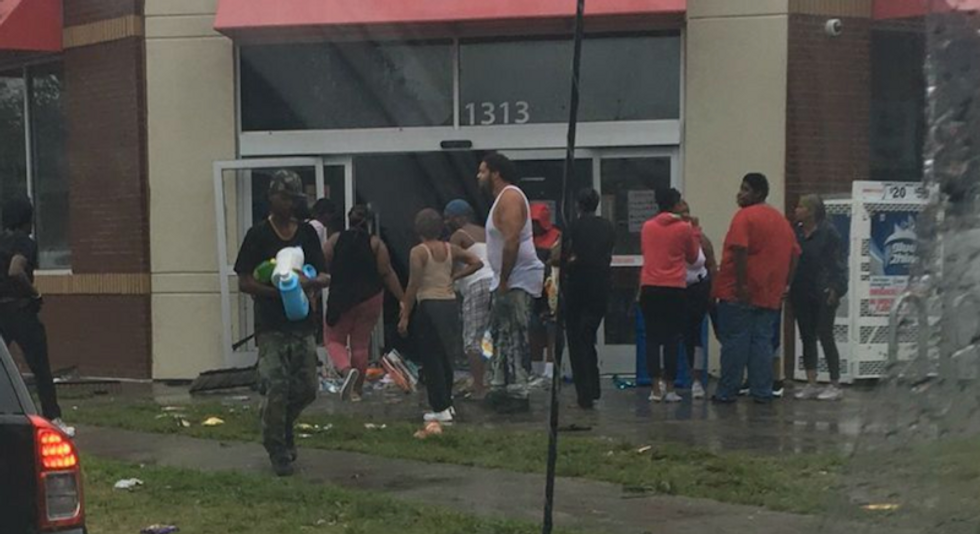 UPDATE: Cops in Wilmington have arrested five people for "looting" the dollar store by taking bottled water and other provisions as the city remains without power and rain pours down.

An incident at a Family Dollar store in Wilmington, North Carolina that is being described as "looting" by Fox News has disappointed local police, who were asked not to intervene.

Wilmington has been battered badly by Florence, and the first grocery store that opened was subject to a "mob scene" as people crowded in to get supplies.

On Saturday, a group of people took needed provisions from a Dollar Store, possibly without authorization. The incident was immediately referred to as a "looting" by the local Fox affiliate and on the Fox News Channel.

As the local Fox affiliate points out, "the Family Dollar sits across from Houston Moore, one of the city's public housing communities."

Wilmington police were told by management of a Family Dollar to stand down. They complained about it on Twitter, writing that "unfortunately" they were asked "not to intervene."

Fox News Channel reporter Rick Leventhal sped through during the incident, focusing his camera on a woman who was loading her car.

On Twitter, the announcement angered conservatives, some of whom called on the the police to shoot people getting supplies from the dollar store after living for two days without power.

@WilmingtonPD @WBTV_News WHY??? If you don’t intervene, arrest them and make a statement to other trouble making cr… https://t.co/fPtWvUjnLH
— tina bradley (@tina bradley) 1537043928.0

Trump slapped down by judge in bid to avoid Jan. 6 Capitol cop trial

Donald Trump's attempt to get a civil suit filed by Capitol police officers who were brutalized by insurrectionists on Jan. 6 dismissed failed and will proceed.

According to a report from Bloomberg News, US District Judge Amit Mehta poured called cold water of the former president's bid to get out from under the lawsuit by claiming presidential immunity.