All but one of Devin Nunes' family sold their farms and moved to Iowa over a decade ago -- why are they hiding? 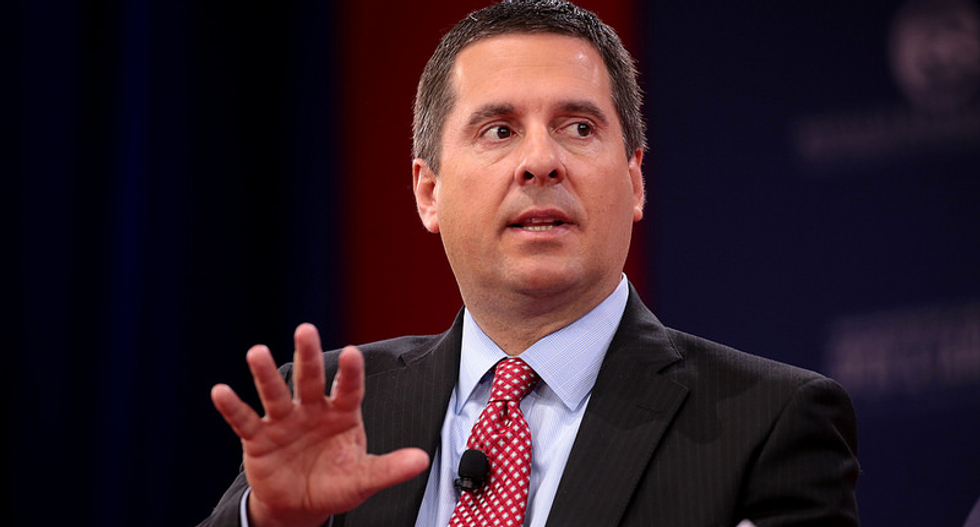 A new Esquire expose on Rep. Devin Nunes (R-CA) reveals one of his deepest secrets -- his entire family has abandoned the farmland he never stops talking about.

According to reporter Ryan Lizza, "The Nunes family dairy of political lore" is a sham.

The Nunes ancestors emigrated from the Azores in Portugal in 1912 to California's Central Valley where the family "worked and saved enough money to buy a 640-acre farm outside of Tulare," a March profile in the National Review describes. But that farm where his brother and parents work is no longer in California, and it hasn't been for over a decade.

"Devin; his brother, Anthony III; and his parents, Anthony Jr., and Toni Dian, sold their California farmland in 2006," Lizza explained. "Anthony Jr. and Toni Dian, who has also been the treasurer of every one of Devin’s campaigns since 2001, used their cash from the sale to buy a dairy eighteen hundred miles away in Sibley, a small town in northwest Iowa where they—as well as Anthony III, Devin’s only sibling, and his wife, Lori—have lived since 2007."

The only person left in California with a dairy is Devin's uncle, Gerald. When Nunes spoke to the National Review, he ceremoniously dipped his hands in the dirt and proclaimed, “I feel as if I had just shaken hands with all my ancestors.” Lizza explained he likely did that at his Uncle's farm since it's the only one left.

A July profile in the Wall Street Journal editorial page highlighted Nunes' dairy by describing the 105-degree heat while the writer stands "on his family's dairy farm." Another profile on Nunes appeared in the Daily Beast, headlined "The Dairy Farmer Overseeing U.S. Spies and the Russia Hack Investigation."

“The cows are not far from his mind. He keeps in regular contact with his brother and father about their dairy farm," the story reads. Except, that farm, isn't in the Central Valley. He's keeping tabs on them while they're in Iowa.

According to Lizza, the family has worked diligently to ensure the public didn't know about the massive family move.

"As far as I could tell, as of late August, neither Nunes nor the local California press that covers him had ever publicly mentioned that his family dairy is no longer in Tulare," he wrote.

Interestingly, Nunes campaigned heavily for Rep. Steve King (R-IA) who represents the Nunes family farm. King and Nunes might share a lot when it comes to their support of President Donald Trump, but they differ dramatically on immigration. Nunes is remarkably progressive since his district relies heavily on immigrant labor. King thinks calf muscles in Mexicans are larger because they have to run through the desert.

Despite King holding an event just miles from the family's farm in Iowa, the biography for Nunes read: “Congressman Nunes’ family has operated a dairy farm in Tulare County, California for three generations.”

Lizza asked why King along with the entire Nunes family would work so hard to hide the fact that Nunes' family moved to Iowa. He took a trip to the area and found the reporter that wrote a profile for an obscure dairy trade publication about the new Iowa residents. When asked why he didn't mention the famous Congressman he replied simply that they asked him not to.

When Lizza tried to talk to the Nunes family, however, things didn't go well. Anthony Jr. said that he was taking down the tag number to report Lizza to the sheriff.

Lizza asked if he could interview him, but Anthony Jr. said he didn't want to be bothered.

But one dairy farmer in the area explained that the Nunes family probably doesn't want to alert anyone to their presence because most farmers depend on undocumented immigrants for labor.

“Eighty percent of the Latino population out here in northwest Iowa is undocumented,” one dairy farmer guessed. “It would be great if we had enough unemployed Americans in northwest Iowa to milk the cows. But there’s just not. We have a very tight labor pool around here.”

He never quite found the answers, but it should likely prompt some questions to Nunes about his family's farm.