Pat Leahy confronts Brett Kavanaugh with evidence he's a liar: ‘I was born at night, but not last night’ 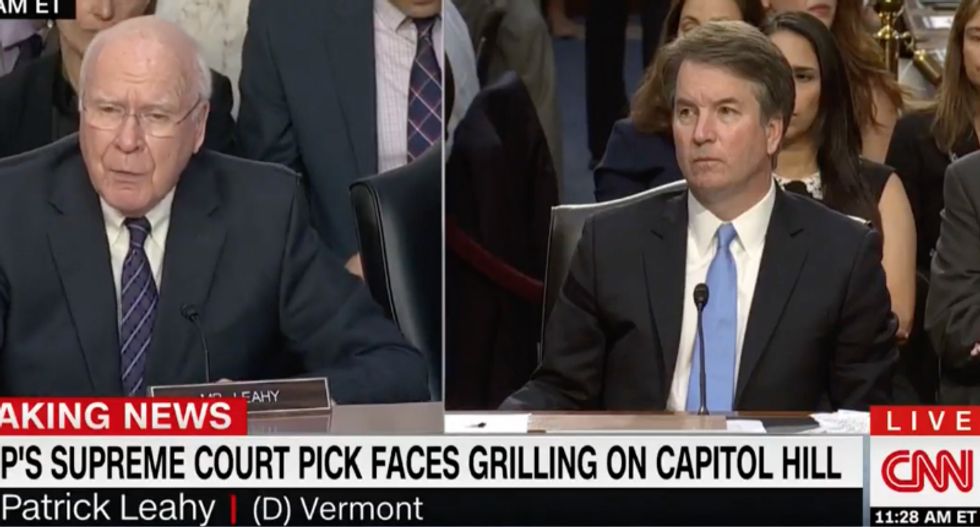 Senator Pat Leahy, senior Democrat on the Senate Judiciary Committee, all but called Supreme Court nominee Brett Kavanaugh a liar for his role in receiving documents stolen from Democrats during the Bush administration -- and then publicly rubbed the nominee's nose in the evidence.

"In 2004 and 2006, you testified -- a number of senators, Republicans and Democrats asked you, and you said you never received any stolen materials. That doesn't appear to be accurate," said Leahy, referring to the Manny Miranda incident, in which a Republican senate aide leaked nearly 7,000 confidential documents from Democratic Judiciary Committee members in an attempt to confirm some of the Bush administration's more controversial nominees.

But Leahy quieted them and returned to the nominee. "Have you been told what any Democratic senators have been advised to do by our staff at this hearing?" "

"No. I'm not remembering anything like that," Kavanaugh responded.

"Nobody handed you something marked highly confidential," Leahy sighed as copies of the memos, clearly stamped "Committee Confidential" appeared on the screen, showing both the names of Mr. Miranda and Judge Kavanaugh. "But that's material you received from Manny Miranda."

The nominee, cornered, refused to make eye contact with the senator. Meanwhile, Leahy continued his interrogation, asking "yesterday when I asked you about the specific events, you said you didn't have any recollection. I'm not going to ask if you remember receiving this e-mail. I'm going to ask you this: why would you ever be asked to keep secret Democratic talking points if they were legitimately obtained?"

Kavanaugh began to stammer through a description of the email contents and questioned why they had been marked "confidential" to begin with.

But Leahy wouldn't allow him to change the subject. "Look how you received it," he said. "Whether it is [confidential] or not, would you consider that somewhat unusual to be receiving from a Republican staff member something marked 'highly confidential', telling him what he found out that a Democrat is going to do?"

A clearly flustered Kavanaugh continued to tap dance around the question as Leahy continued to hammer him. "If somebody handed me a memo saying 'this is confidential that Senator Grassley's staff has prepared for him', I not only would not read it, I would be on the phone immediately to Senator Grassley saying, 'I'm bringing something over that just arrived to me, take a look at it."

But as Leahy illustrated, that's not what Kavanaugh did in the Miranda case. "July 30, 2002, you received an e-mail from Miranda saying they had on 100% information that I was convening a meeting about a controversial nominee. And then further in August 13, 2002, e-mail obviously taken from my internal e-mail what I was going to do," he asked the nominee, who nervously thumbed through a stack of papers on his desk. "Did any of this raise a red flag in your mind?"

Again, Kavanaugh tried to deflect and again Leahy cut him off. "You received an e-mail from a republican senate staffer with the subject line, 'spying'. That is not overly subtle," Leahy said wryly. "This staffer appears in over 1,000 documents received together with both you and Mr. Miranda. 'She says she has a mole for us' and so forth. None of this raised a red flag with you?"

Kavanaugh said it did not, rambling about "bipartisanship" and "friendships" before petering out into what amounted to a verbal shrug.

Leahy sat silently for a moment, glaring at the nominee before saying "Judge, I was born at night, but not last night," as Kavanaugh sat staring at the notes on his desk.

Manhattan District Attorney Cyrus Vance, Jr. will have to act quickly if he wants the indictment of Donald Trump to be part of his legacy, according to a new report.

"In the past year, Manhattan District Attorney Cyrus Vance Jr. has raised only a few thousand dollars for his re-election. He hasn't attended any candidate forums held virtually ahead of this year's Democratic primary in June, and he hasn't publicly voiced a desire to run for a fourth term. People close to Mr. Vance said they believe he won't seek re-election, leaving a crowded field of eight candidates vying for the most prestigious law enforcement job in New York City," The Wall Street Journal reported Monday.