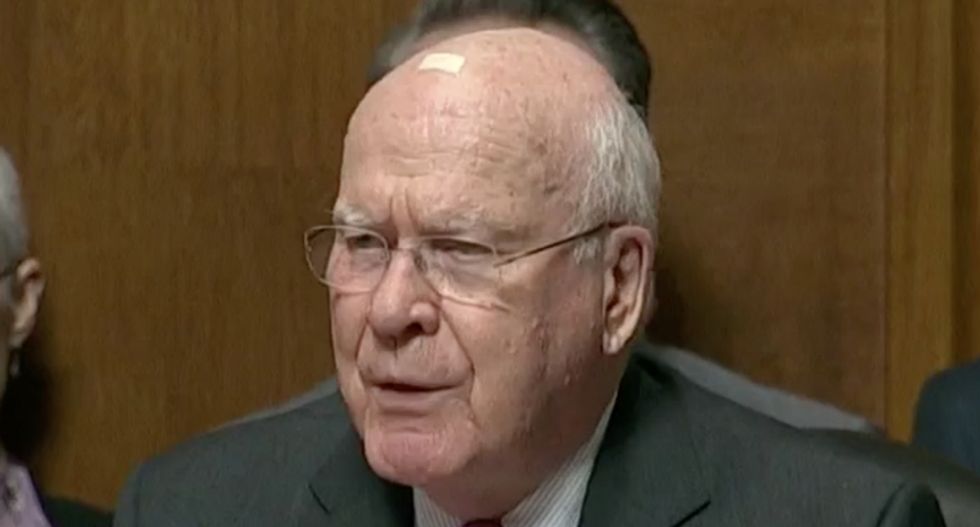 Vermont Senator Pat Leahy (D) accused Republicans on the Judiciary committee of not listening to women, and all but called Supreme Court nominee Brett Kavanaugh a liar, in a blistering response to a party-line vote that moved the embattled nominee out of committee and one step closer to a lifetime appointment to the Court.

"It feels like 'Alice in Wonderland' around here. It's unbelievable where we are today." Leahy said, describing the "almost surreal" circumstances. "The Senate is supposed to be an independent, equal branch of government. We are no longer that. We are an arm, and a very weak arm, of the Trump White House. Every semblance of independence has just disappeared."

Leahy blasted Republicans' refusal to call outside witnesses or the FBI after Dr. Christine Blasey Ford and other women alleged they had been sexually assaulted by Mr. Kavanaugh, "even though we have that precedent when the Republicans did that."

"That has always been the first step when new derogatory information comes to light about a nominee. Even in one instance when the information was as minor as decades-old marijuana use," Leahy said, referring to the withdrawal of Judge Douglas Ginsburg in the 1980s. "Republicans still made sure we had an FBI investigation. Why is Judge Kavanaugh, who is facing much more serious allegations, serious allegations of sexual abuse, why is he being held to a lower standard than all the nominees before him?"

Leahy answered his own question moments later, stating flatly that Judiciary Republicans, a group comprised entirely of men, "don't want to hear women who have relevant evidence." "Is that really what the Senate Judiciary Committee has lowered itself to?" he asked.

Leahy then turned his focus to Kavanaugh, who he portrayed as a serial liar. "Judge Kavanaugh's veracity has been an issue every single time he's ever testified before this Senate," Leahy charged, and brought up example after example.

"Time and time again, when confronted under oath with questions about his involvement in Bush-era scandals or controversial matters, he misled the Senate," Leahy said. "Now, the fact that he misled the Senate over and over again does not make him guilty of sexual assault as a 17-year-old, nor does the fact he minimized the heavy drinking in his youth and misrepresented the misogyny in his yearbook."

But, Leahy added, "It goes to the heart of Judge Kavanaugh's truthfulness anytime he's faced with potentially incriminating questions."