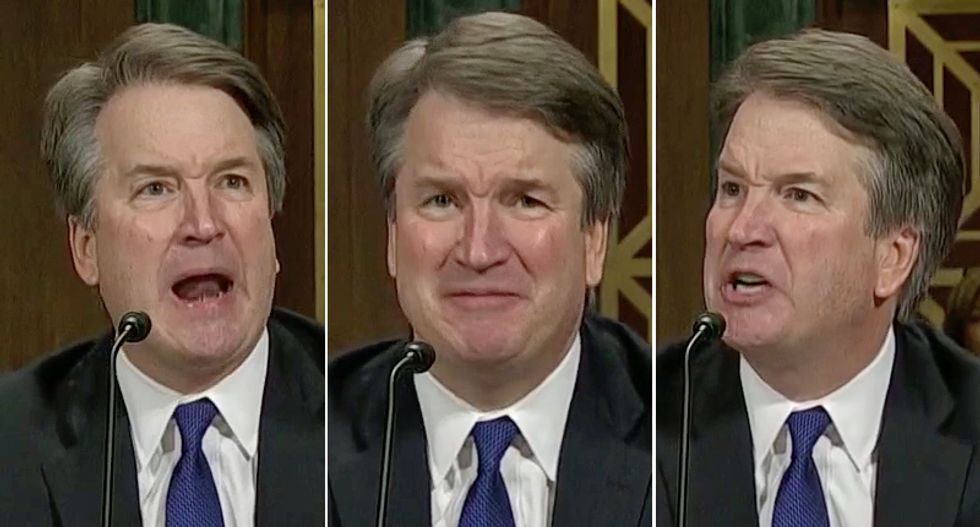 Well, what did we expect?  Privileged prep-monster Brett Kavanaugh showed up at the Senate Judiciary Committee, he sat down at the witness table, he took out his New Revised Post-Fox News Interview Handwritten Statement, and he delivered a petulant, enraged, screaming, tearful alcoholic blast at Democrats, Clintonites, The Left, and anyone else who would deny him his rightful seat on the Supreme Court. Swinging wildly from self-aggrandizement and anger to self-pity and tears, he turned a Capitol Hill hearing room into a Trump rally, even going so far as to tell liberals how he’ll rule against them when he gets on the court.  “What goes around, comes around,” said a defiant, red-faced Kavanaugh, alternately sniffling and sipping from a water bottle like he was nursing a hangover the likes of which the world has never seen.

Here’s how it went, in real time:

He’s angry! Shouting! Spitting! I wrote this statement myself! No one has seen it but one of my law clerks. He's calling the confirmation process a "national disgrace." You've replaced advise and consent with search and destroy! Destroyed my name and my family!

It's the 2018 version of "high-tech lynching." He's rolling the dice with the Clarence Thomas strategy. They did it to blow me up and take me down.

He's saying he did okay in his first hearings, so they needed a "new tactic to take me down.” A long series of crazy smears. Crazy stuff. This has destroyed my family and my good name! This from a man who serves on the most important appeals court in the nation, and if he doesn’t make it on the Supreme Court, will easily be able to retire from his current judgeship and move straight into a multi-million dollar partnership in a big D.C. Republican law firm. Guaranteed.

This whole two week effort has been a calculated and orchestrated political hit! This is a circus! He says they’re out to destroy him to get “revenge on behalf of the Clinton’s.” The attacks are coming out of hostility to Trump. They want revenge for losing the 2016 election!

It's the Fox News far right hit parade! He’s taking off the gloves! The old partisan Republican hack Kavanaugh is In The Room! The next thing he’ll do is relive the Florida recount!

This has been a coordinated and well planned effort to destroy my good name and my family and you will not drive me out! You'll never get me to quit! Ever!

The cheeks, rosy at first, are in Full Crimson Mode.

Now he is actually crying about his 10 year old daughter saying her prayers, and saying they should “pray for the woman."

Pathetic. He's like Trump. One minute enraged.  The next self-pitying.

Now he's going through his resume. Talking about Ken Starr's office and investigation of Clinton. He was "opposition researched." One person on the left paid a million dollars to evidence of wrongdoing. Nothing was found about me!

He was in the Bush White House, "entrusted with the nation's most sensitive secrets."  Wow.

Now suddenly, he’s reading the statement they already published. The whole thing he began with was a new, angry intro.

He's repeating everything he said in the intro. All four people given as witnesses deny being at the party, despite the fact that three of them say they simply can’t remember, including his Brewski Buddy, Mark Judge. Repeating everything he just said denying that he was at a party over and over again.

In 9th grade he started keeping calendars. Here come the heart strings: Mine are not as good as my dad's. Sniffle. They're about what you'd expect for a kid. Some goofy parts. Sniffle. Weep.

My calendar shows all but definitely I was not there.

Now he's bragging about how many lawns he cut. How many times he was working out and playing basketball. Sniffle. Hanging out at somebody's house. His dad ran workouts. Sniffle. All of this coming from the calendar.

My calendar is very exact. Just like my dad’s. Sniffle. Sip.

He’s always had a lot of close female friends. Not girlfriends. Female friends. Maybe it's because he’s an only child. Names a few. Sniffle. Nicky. Friends for a lifetime. Sniffle. Several of "those great women are in the seats right behind me today." Sniffle. He’s crying openly. See? I like girls!  I still like girls!

Drinking beer. He likes to drink beer, but there is a bright line between drinking beer and sexual assault. If every American who drinks beer is accused of sexual assault, we'll be in a brand new place in this country.

Our yearbook was a disaster. Cross between "Caddyshack," "Animal House" and "Fast Times at Ridgemont High." My friends and I have cringed when we read about it and talked to each other. Sniffle. Sip. Whew.

One thing in particular we're sad about, one of our good . . . sniffle . . . sniffle . . . one of our good female friends had her name used in connection with alumnus. To show she was one of us. But the media turned it around and said it was about sex. So sorry to her for that yearbook reference. Sniffle. He’s talking about the 14 friends who had “Renate Alumnus” in their yearbook caption.  All of them on the football team. All of them buddies.

Still sniffling. She was and is a great person. What I want to make clear is my friendship with her. Sniffle. Sob.

I never had sexual intercourse or anything close to it. It was a matter of faith and respect and caution. The committee has the letter from 65 women who knew me in high school. That letter came together in one night, 35 years after graduation, after sexual assault allegation, and they knew they would be vilified if they defended me. They put themselves on the line for me! Those are some awesome women, and I love them. Sniffle.

The break couldn’t come soon enough, even for the Republicans on the committee. Kavanaugh had been in the throes of a full-fledged Technicolor breakdown, face reddening, sobbing, moaning about working out with his buds, crying about his daddy’s calendars. The whole committee fled the room like a bomb was ticking on the other side of the dais.

When they came back, Kavanaugh had pulled himself together, but just barely. He snapped at the first couple of Democrats who questioned him, refusing to answer their questions about why he wouldn’t call for an investigation by the FBI investigation, since in his opening statement he had said he would “talk to anybody.”

It was when Minnesota Senator Amy Klobuchar took her turn that he snapped. She started questioning him about his drinking, and his discomfort was clear. He leaned back in his chair, gazed at the ceiling, and a look crossed his face that was somewhere between a little boy and your angry, out of control neighbor about to bash in your windshield because you stepped on his grass.

Klobuchar explained that her father had been an alcoholic his entire life, was in AA, and even, at age 90, was still a member of the fellowship. Kavanaugh reacted like she’d sprayed him with mace. Squinting, quivvering, practically spitting at her, he snapped. She asked if he had ever been so drunk he blacked out. “I don’t know, have you?” he barked, sneering at her.

Klobuchar knew exactly what she was looking at. You could see it on her face: pity, sadness, not at Kavanaugh’s politics, but at the state he was in.

Grassley quickly called for a break. Someone got to Kavanaugh over the break, because when he returned, he asked if he could say something and apologized meekly for his last remark to Klobuchar.

But the damage was done. The flash point turned out not to be sexual harassment, but booze. He was happy to talk about how much he liked beer, but reacted bitterly and defensively when challenged about how much he drank.

I think we saw the results this afternoon when after the midday break, the committee returned for the big vote to move the nomination. Instead of voting quickly and getting out of town, they accepted a deal from Jeff Flake of Arizona to put a hold on the nomination for a week and have the FBI “complete” its background investigation.

Suddenly the FBI investigation that was so radioactive no Republican would touch it was a good idea that would “help bring the country together.” Even Lindsey Graham, who had screamed his way into the headlines on Thursday denouncing the Democrat’s “conspiracy to destroy this man and his family,” was Casper the Friendly South Carolinian. He was eager to go talk to “Mitch” and “Trump” and explain things. Nothing wrong that a little FBI investigation won’t fix, folks. Leave it to Lindsey the lawman.

Two things apparently happened overnight and during the break. One or more “moderate” Republicans were alarmed at Kavanaugh’s out of control, un-judicial behavior on Thursday, and there were probably a few Senators other than Klobuchar with alcoholics in the family (or personal experience) who knew exactly what they were looking at when Kavanaugh went off on her. Maybe they also saw a man in deep denial, angry, cornered, defending himself from the inevitable.

All you need to know to conclude that Kavanaugh will never be confirmed is the Republican’s sudden embrace of the FBI, which has gone from an anathema to a lifeboat they’re all jumping into. Even Mitch McConnell has taken an oar, and they’re all rowing like crazy. Kavanaugh better put down his brewski and put on a life preserver, because they’re going to throw him overboard.