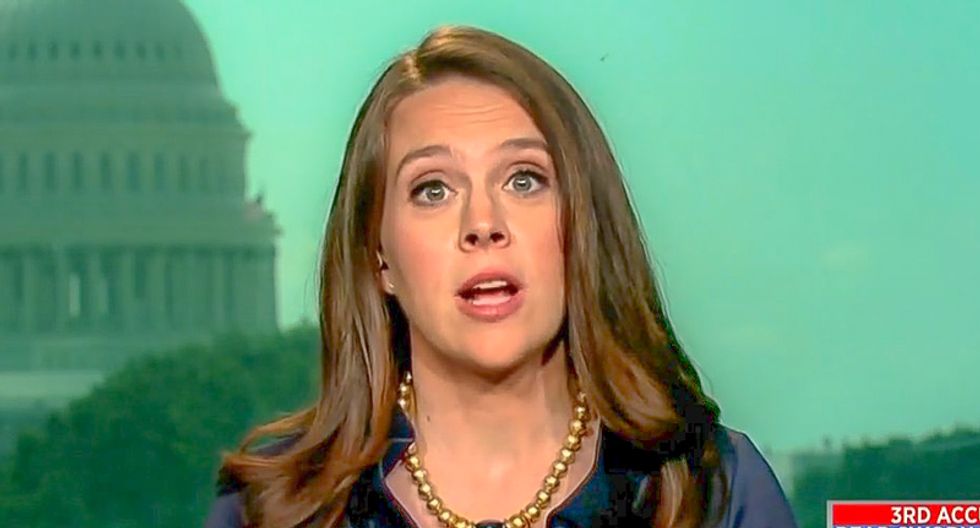 Carrie Severino, a spokesperson for the conservative Judicial Crisis Network, on Wednesday declined to say that Supreme Court nominee Brett Kavanaugh should be confirmed after a new witness came forward alleging sexual misdeeds by the judge.

In an affidavit provided to the Senate Judiciary Committee, Julie Swetnick alleged that she was at 10 or more house parties with Kavanaugh, where he mistreated women. Swetnick said that she was victim of "gang rape" when Kavanaugh present at one such party.

MSNBC's Craig Melvin asked Severino, whose organization is running ads in support of the nominee, to react to the news in a Wednesday interview.

"Does that change your support for Judge Kavanaugh?" Melvin wondered.

"Well, obviously these are very serious allegations," Severino stuttered, evading the question. "And the experience Swetnick describes is horrible. So -- and -- and the challenge here is the Judiciary Committee is looking into it."

"Now, at least they have an affidavit here, now the committee is going to look into, is there any actual corroboration?" she continued. "And -- and if there is, I'm sure they will continue to probe into it."

But Severino insisted that there was no reason to put the proceedings on hold to investigate the latest claims.

"Should Judge Kavanaugh still be confirmed?" Melvin pressed, but Severino dodged the question once again.

"I think we have to look at into this further," Severino replied "I think -- I think from what we know so far, we don't have corroboration yet. And so I think, if -- if the Senate votes on this, you know, soon, I think they would have to go on the -- on what they know so far."

Severino, however, declined to say that Kavanaugh should be confirmed.

In an earlier defense of Kavanaugh, Severino said that sexual assault allegations made against the judge could be dismissed as "rough horseplay."