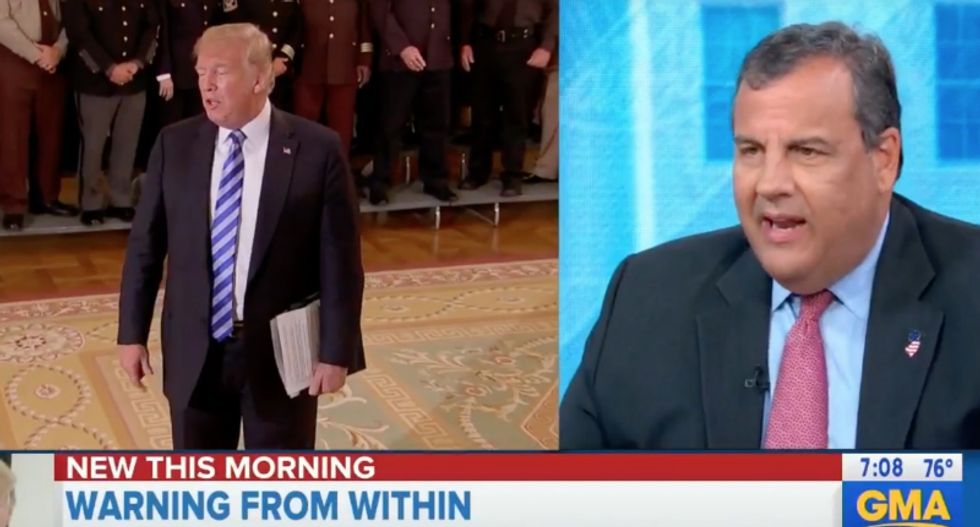 Former GOP stars turned ABC contributors Chris Christie and Matthew Dowd compared the Trump administration to a sinking submarine on"Good Morning America" -- and said the White House may be fatally damaged thanks to an anonymous op-ed published in the New York Times from "a senior official in the Trump administration" who says he or she and others are working to thwart Trump's worst instincts.

Christie said that for several years he'd heard rumors of "a group of people in the White House" who were trying to keep the president coloring in the lines. "The bigger issue, though, is how do you get control of this if you're the president," Christie said, indicating the it was probably too late anyway. "If we go off on a leak investigation I can tell you this, I ran a number of leak investigations as U.S. attorney, they're never fruitful."

Dowd had even harsher words, speaking directly to the sanity of the 45th president. "This is not a leak but a torpedo shooting a hole in the side of the hull on the same team," he said. "This is a massive hole. Now the president who wants to demonstrate that he isn't unhinged has gone on the hunt for Red October, full hunt for Red October looking for Captain Ramius to see who is at fault and who is doing this."

Dowd added that the White House may become completely paralyzed and dysfunctional, asking the GMA host "How can anybody within the White House, including the president, trust anything they see, hear or do?"

Both were clearly uncomfortable with the op-ed writer's anonymity. But while Dowd said he "would much prefer if somebody is going to stand on the ground of integrity." He seemed to think the writer had no other choice.

"The problem is Congress, the GOP and Congress, has been unwilling to hold this president accountable on any of these things," Dowd said. But he also pointed out that the same stories keep coming out.

watch the video below