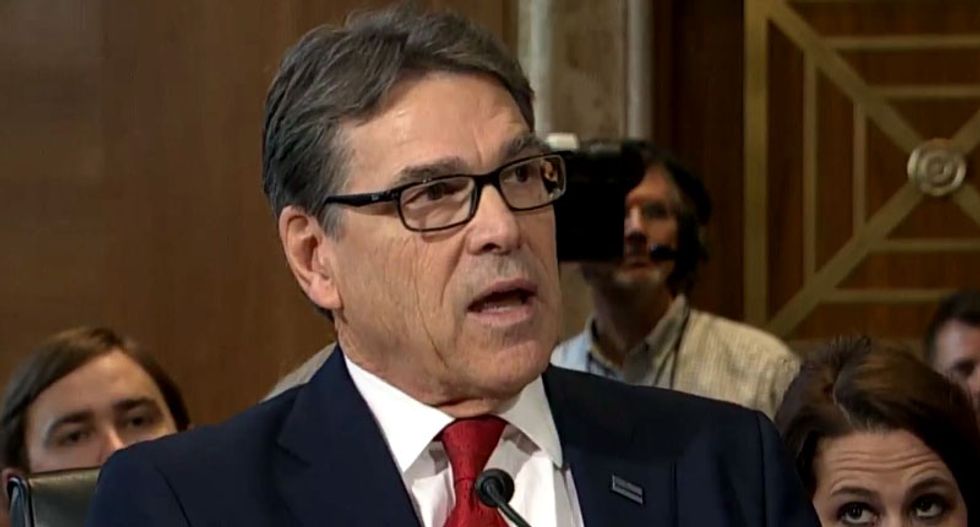 U.S. Energy Secretary Rick Perry will meet his counterparts from Saudi Arabia and Russia starting on Monday, sources familiar with the matter said, as the Trump administration encourages oil-producing countries to keep output up two months before it is due to renew sanctions on Iran’s crude exports.

Perry will meet Khalid al-Falih, Saudi Arabia’s energy minister, and other officials from the kingdom, the world’s largest oil exporter, in Washington on Monday morning, a U.S. government source said.

Perry, al-Falih and Darren Woods, the chief executive of ExxonMobil, were introduced on Saturday to the crowd at a Texas A&M University football game in College Station, Texas. All three attended at the university.

The U.S. energy secretary will also meet with Russian Energy Minister Alexander Novak on Thursday in Moscow, according to the U.S. source and a diplomatic source said.

Perry will be the most senior U.S. official to visit Russia since President Donald Trump met Russian President Vladimir Putin in Helsinki in July to try to improve ties that have dipped to a post-Cold War low.

Moscow and Washington are at odds over U.S. accusations of Russian meddling in U.S. politics, Syria, Ukraine and the poisoning of a former Russian spy in Britain.

Officials from the United States and Russia, two of the world’s largest oil and natural gas producers, formerly met regularly to discuss energy issues. Those meetings stopped in 2014 after Russia annexed Crimea.

Trump has said he wants to improve ties, but his administration is considering imposing new sanctions on Moscow, as is the U.S. Congress.

Novak has said in the past that the United States should not be permitted to impose such sanctions without a vote of the U.N. Security Council, of which Russia is a permanent member.

Perry and Novak, who last met in June in Washington, will likely discuss Russia’s Nord Stream 2 pipeline project to carry Russian gas to Germany under the Baltic Sea. Trump and former U.S. President Barack Obama have criticized the project, saying it would increase Russian influence in Europe, but Germany supports the pipeline.

Perry and Novak are also expected to discuss global oil markets in the context of cooperation between OPEC, of which Saudi Arabia is the largest producer, and non-OPEC countries, including Russia.

Trump withdrew from the nuclear deal with OPEC member Iran in May. His administration is due to re-impose sanctions on Iran’s oil shipments in November and is pushing consuming countries to cut their purchases of the oil to zero, although it may issue some waivers. Some countries including India have already cut purchases of Iranian oil, which has helped push up global oil prices.

OPEC and non-OPEC officials will meet later this month to discuss proposals for sharing an oil-output increase after the groups decided in June to boost output moderately.

Reporting by Maria Kiselyova and Olesya Astakhova in Moscow, Timothy Gardner in Washington; Editing by Kevin Liffey and Will Dunham

While former President Donald Trump's Save America PAC claims that its donors will be "the Patriots who SAVED AMERICA," it has been discovered that much of the PAC's money is being used for Trump's personal expenses, including payments to his wife Melania Trump's fashion designer.

The Save America PAC released its financial disclosures for August on Tuesday, and Washington Post reporter Isaac Stanley-Becker noted on Twitter that the PAC listed an $18,000 payment to Herve Pierre Braillard for "strategy consulting." A fashion designer for multiple previous first ladies, Braillard has styled Melania Trump for a number of years, and helped design the dress that she wore at the 2017 Inaugural Ball.