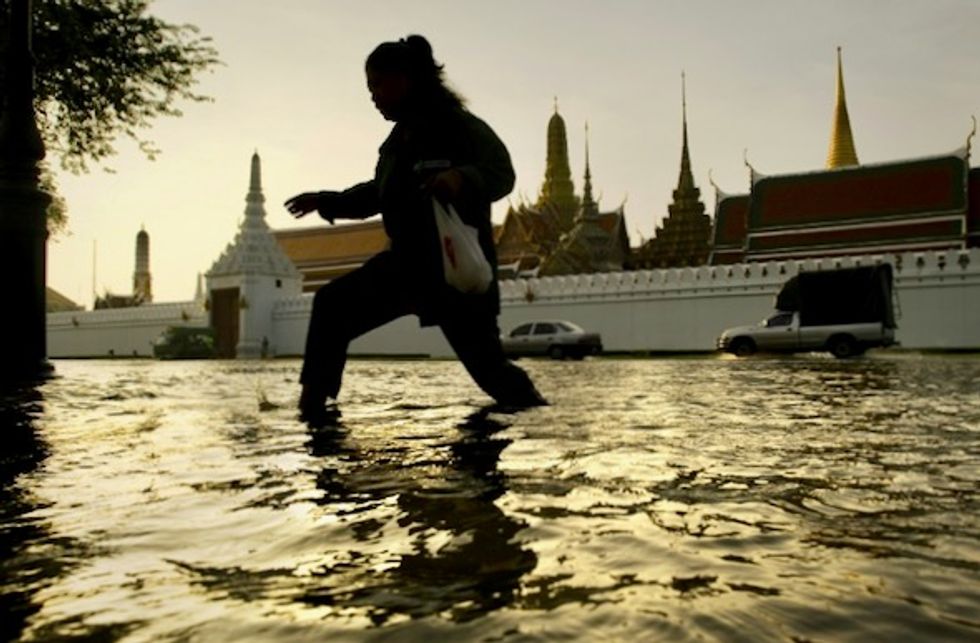 As Bangkok prepares to host climate-change talks, the sprawling city of more than 10 million is itself under siege from the environment, with dire forecasts warning it could be partially submerged in just over a decade.

A preparatory meeting begins Tuesday in Thailand's capital for the next UN climate conference, a crunch summit in Poland at the end of 2018 to set rules on reducing greenhouse emissions and providing aid to vulnerable countries.

As temperatures rise, abnormal weather patterns -- like more powerful cyclones, erratic rainfall, and intense droughts and floods -- are predicted to worsen over time, adding pressure on governments tasked with bringing the 2015 Paris climate treaty to life.

Bangkok, built on once-marshy land about 1.5 metres (five feet) above sea level, is projected to be one of the world's hardest hit urban areas, alongside fellow Southeast Asian behemoths Jakarta and Manila.

"Nearly 40 percent" of Bangkok will be inundated by as early as 2030 due to extreme rainfall and changes in weather patterns, according to a World Bank report.

Currently, the capital "is sinking one to two centimetres a year and there is a risk of massive flooding in the near future," said Tara Buakamsri of Greenpeace.

Seas in the nearby Gulf of Thailand are rising by four millimetres a year, above the global average.

The city "is already largely under sea level", said Buakamsri.

In 2011, when the monsoon season brought the worst floods in decades, a fifth of the city was under water. The business district was spared thanks to hastily constructed dikes.

But the rest of Thailand was not so fortunate and the death toll passed 500 by the end of the season.

Experts say unchecked urbanisation and eroding shorelines will leave Bangkok and its residents in a critical situation.

With the weight of skyscrapers contributing to the city's gradual descent into water, Bangkok has become a victim of its own frenetic development.

Making things worse, the canals which used to traverse the city have now been replaced by intricate road networks, said Suppakorn Chinvanno, a climate expert at Chulalongkorn University in Bangkok.

"They had contributed to a natural drainage system," he said, adding that the water pathways earned the city the nickname 'Venice of the East'.

Shrimp farms and other aquacultural development -- sometimes replacing mangrove forests that protected against storm surges -- have also caused significant erosion to the coastline nearest the capital.

This means that Bangkok could be penned in by flooding from the sea in the south and monsoon floods from the north, said Chinvanno.

"Specialists anticipate more intense storms in this region in the years to come."

Narong Raungsri, director of Bangkok's Department of Drainage and Sewage, admitted that the city's "weaknesses" stem from its small tunnels and the hyper-development of neighbourhoods.

"What used to act as water basins are now no more," Raungsri said.

"Our system can only handle so much -- we need to enlarge it."

Today, the government is scrambling to mitigate the effects of climate change, constructing a municipal canal network of up to 2,600 kilometres with pumping stations and eight underground tunnels to evacuate water if disaster strikes.

Chulalongkorn University in 2017 also built in central Bangkok an 11-acre park specially designed to drain several million litres of rain and redirect it so surrounding neighbourhoods are not flooded.

But these ad-hoc fixes may not be enough.

"We need a clear policy of land management," said Greenpeace's Buakamsri, adding that the need for increased green spaces is outweighed by developers' interests.

"The high price of land in Bangkok makes economic interests a priority."