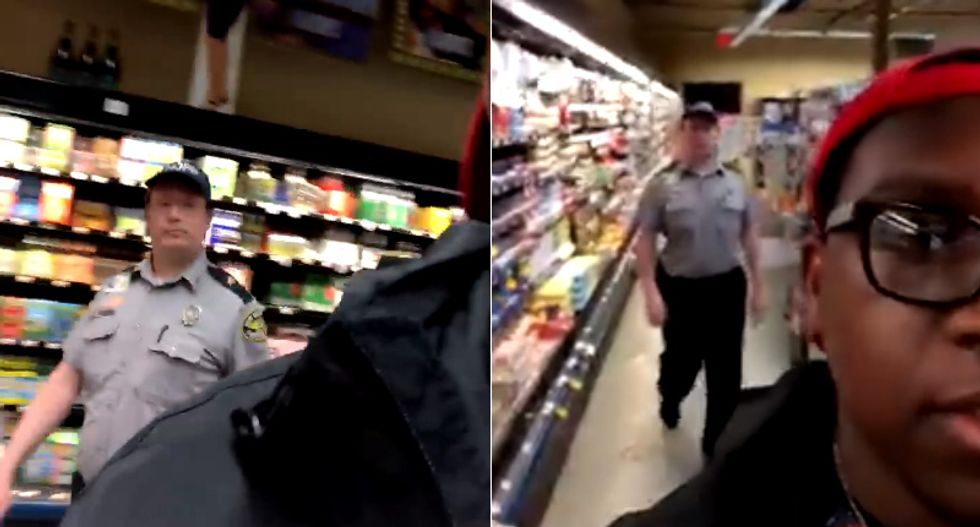 A New Orleans grocery store manager replaced one of their security guards after he was caught on video racially profiling a black shopper.

On Sept 1st, Branson Morgan was at the Breaux Mart when a security guard began closely following Morgan while he was shopping. Morgan said that officer made him feel uncomfortable and began recording the incident.

“Three of us (two white, and me) were in one aisle looking at products (not causing a scene, being disruptive or causing any harm whatsoever) when this security guard comes up, stands about 3 ft from my friends and I and crosses his arms in a very confrontational, oppressive way,” Morgan wrote on Facebook.

Morgan continued to shop but noticed the security following the group.

“At this point, we felt very uncomfortable and it was obvious that he was profiling us, and wanted us to feel unwelcome,” Morgan wrote. “I then tell the man that we have money and are not doing anything wrong. We go a few aisles away to find our friend and tell him to return all of his items, and that we’re not spending money at a store like this.”

The group brought the situation to the attention of the manager, who said they would investigate the situation.

After leaving the store, the security guard followed Morgan to his car and even took a picture of his license plate.

The next day the store manager wrote on Facebook saying they security guard and been replaced.

“We are getting to the bottom of what happened,” The manager wrote on the stores Facebook page. “We’ve reached out to the man in the video privately, and we are looking forward to speaking with him. Breaux Mart has zero tolerance for discrimination of any kind and we take this situation very seriously. We treat our employees, and customers equally, no matter what. In the meantime, the security guard on duty has been replaced while we investigate.”