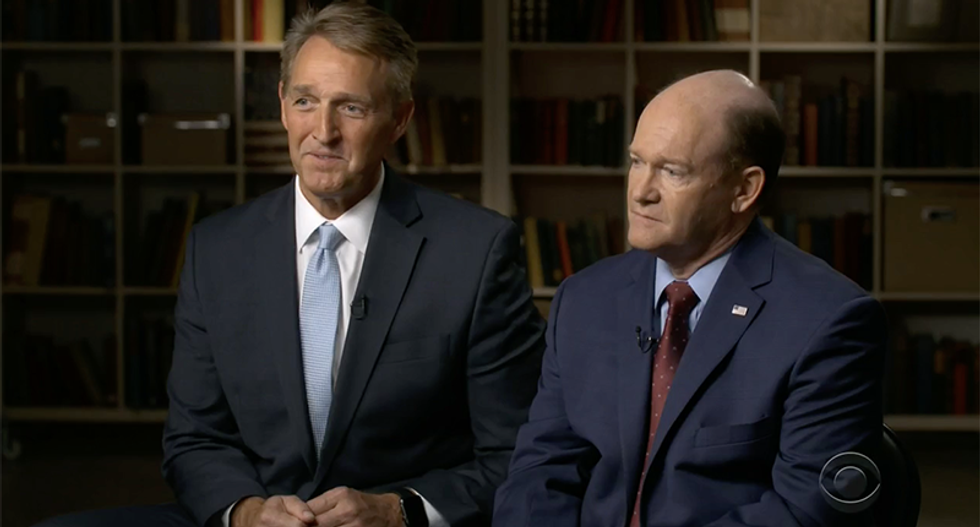 Sen. Jeff Flake (R-AZ) said in an interview with "60 Minutes" that if he was running for reelection he couldn't have crossed the aisle to talk to his colleague about switching sides and stopping the Judiciary Committee vote on Brett Kavanaugh.

In an interview beside Sen. Chris Coons (D-DE), the two men also agreed that there's no way they'll be comfortable confirming if Kavanaugh was found to have lied.

"Nomination's over?" they were asked.

"I would think so," Coons said at the close of their interview.

They talked about what happened in the crucial moment when Flake sat in the committee room after women approached him at the member elevator in the U.S. Capitol. Coons described his friend as looking tortured.

Flake then stood up, crossed the Democratic side of the committee horse-shoe and tapped Coons on the shoulder and exited. Coons got up and followed behind.

Coons said that Flake was concerned the whole thing was tearing the country apart and he refused to allow it to continue. Flake confessed that there was no way he could have taken that chance and stuck his neck out if he was running for reelection in Arizona today. He explained the political climate is simply too toxic.