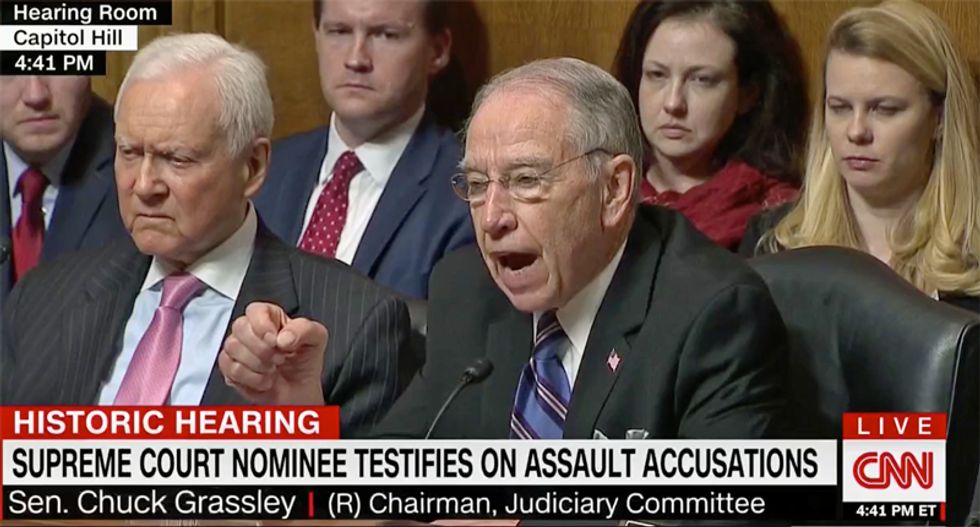 The chairman of the Senate Judiciary angrily declared "we're not suspending this hearing" after a Democratic Party senator asked Judge Brett Kavanaugh why he was not asking for an FBI investigation that could help clear his name.

Sen. Dick Durbin (D-IL) noted that in his opening statement, Judge Kavanaugh had claimed he welcomed "any kind of investigation."

"I've got a suggestion for you," Durbin offered. "Right now, turn to your left in the front row to Don McGahn, counsel to President Donald Trump and ask him to suspend this hearing until the FBI completes the investigation of the charges made by Dr. Ford and others and goes to bring the witnesses forward and provides that information to this hearing."

"I'm sure that the chairman, at that point, will understand that is a reasonable request to finally put to rest these charges if they are false, or to prove them if they are not," Durbin noted. "You spent two years in the White House office that approved judicial nominees. You turned to the FBI over and over and over again for their work."

"Let's bring them in here and now. Turn to Don McGahn, it's time to get this done," he challenged. "An FBI investigation is the only way to answer some of these question."

"This committee is running the hearing, not the White House, not Don McGahn, not even you as a nominee," he noted, ignoring the fact Kavanaugh could withdraw his nomination.

"We're here because they wanted to address charges that they thought were unfair, or activities, like sexual assault that is unfair, so I want to assure Sen. Durbin, regardless of what you say to Sen. Don McGahn (sic), we're not suspending this hearing," Grassley declared.

"I would just say this," Durbin replied. "If you, Judge Kavanaugh turned to Don McGahn and to this committee and say, 'for the sake of my reputation, my family name and to get to the bottom of the truth of this I am not going to be an obstacle to an FBI investigation.'"