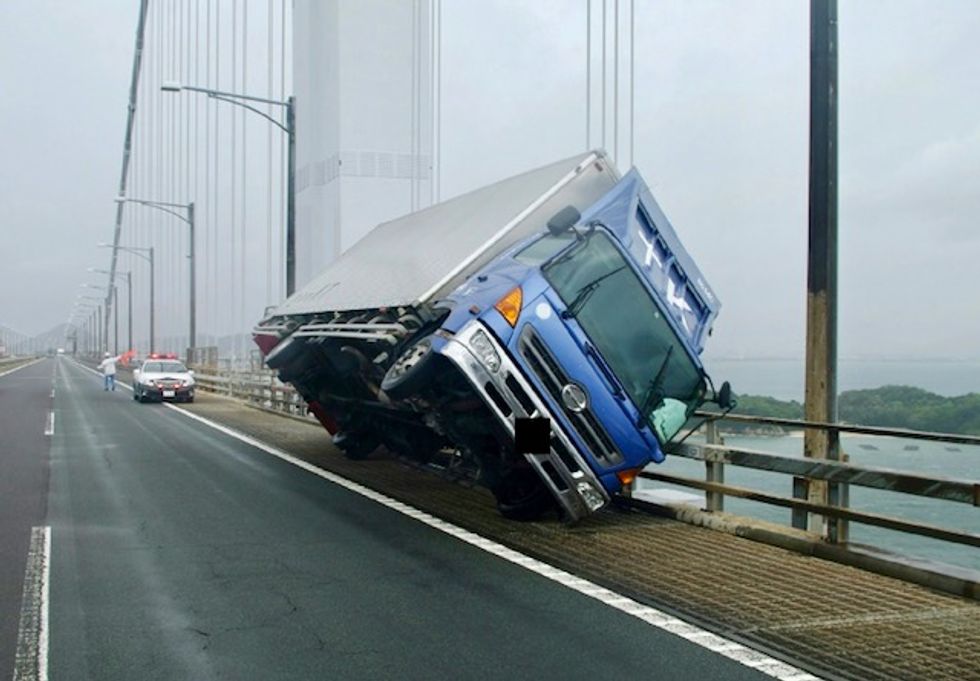 The strongest typhoon to hit Japan in 25 years made landfall Tuesday, with more than a million people urged to evacuate as the storm battered the country's west with violent winds and heavy rainfall.

Typhoon Jebi, with winds of up to 216 kilometres (135 miles) per hour, swept a tanker anchored in Osaka Bay into a bridge and partially flooded Kansai International Airport on an island in the bay.

But hours after it made landfall, there were no reports of major damage elsewhere and no injuries.

Images on public broadcaster NHK showed the top of the tanker had smashed into part of the bridge linking the city of Izumisano with the airport but there were no reports of injuries.

Local media said runways and the basement of part of the airport had been flooded by high waves whipped up by the storm. All flights were cancelled at Kansai.

Jebi was moving fast on a northeast track and expected to weaken as it crosses Japan.

The severe weather has left tens of thousands without power and forced the cancellation of hundreds of flights as well as trains and ferries.

Japan's weather agency warned of possible landslides, flooding and violent winds, as well as high tides, lightning and tornadoes in a swathe of the Japanese archipelago.

Arriving on land, Jebi had winds of up to 162 kilometres (100 miles) per hour at its centre, making it a "very strong" typhoon, the weather agency's chief forecaster Ryuta Kurora told AFP.

As the storm approached, Abe called a disaster response meeting and cancelled a trip to western Japan.

"I urge the Japanese people to take action to protect your lives, including preparing and evacuating early," he said.

He instructed his cabinet to "take all measures possible".

Evacuation advisories were issued for 1.19 million people in western and central Japan, with another 16,000 people issued with stronger but non-mandatory evacuation orders, the fire and disaster management agency said.

Local media warned that the wind was strong enough to topple traditional-style wooden houses as well as power poles, and urged people in affected areas to avoid non-essential travel.

Television footage showed high waves crashing into breakers and flying debris in areas where the storm made landfall.

Primary and middle schools in affected areas were closed while regional businesses also reacted quickly, with Universal Studios Japan in Osaka shutting down for Tuesday along with factories for several large manufacturers.

More than 700 flights were cancelled, including several international flights departing and arriving at Nagoya and Osaka, along with ferries, local train services and some bullet train lines.

More than 175,000 buildings in central and western Japan were without power, according to a tally compiled by Bloomberg News of local utilities.

Jebi has a similar trajectory to Typhoon Cimaron which made landfall on August 23, disrupting transport but causing limited damage and few injuries.

Japan is regularly struck by major storms during the summer and autumn.

The country has been sweating through a record deadly heatwave that followed devastating rain in parts of central and western Japan that killed over 200 people.

The sustained rain caused widespread flooding and landslides in July, devastating entire villages and forcing thousands from their homes.

The flooding and landslides proved so deadly in part because many people did not heed evacuation warnings, which are not mandatory.

Since the disaster, authorities have urged people to take the warnings more seriously and prepare to leave home immediately they are issued.