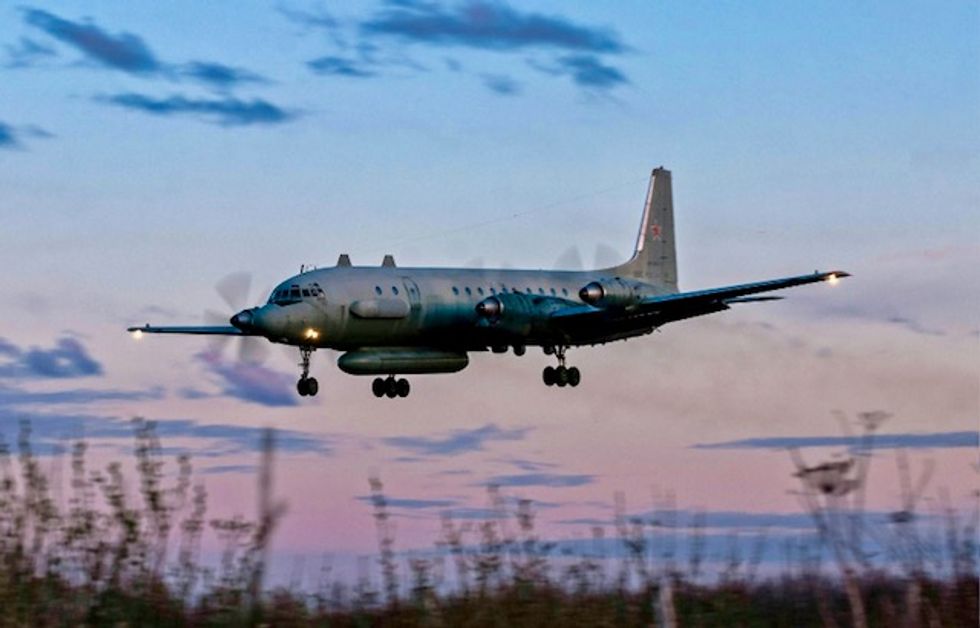 Syria has accidentally downed a Russian Ilyushin military aircraft, like this one, killing all 15 crew onboard when its air defences went into action against an alleged Israeli missile strike, the Russian army says AFP/File / Nikita SHCHYUKIN

Syria accidentally downed a Russian military aircraft with a crew of 15 onboard when its air defences went into action against an alleged Israeli missile strike, the Russian army said Tuesday.

The incident, which happened late Monday, was the worst case of friendly fire between the two allies since Russia's game-changing military intervention in September 2015.

The Russian Ilyushin dropped off the radar over the Mediterranean moments after Turkey and Russia announced a deal that offered millions of people reprieve from a threatened military assault in northern Syria.

There was no immediate word from Damascus, but the deadly air war sequence started when missiles struck the coastal region of Latakia on Monday.

Israeli pilots carrying out attacks on Syrian targets "used the Russian plane as a cover, exposing it to fire from Syrian air defences," the Russian military said.

The plane downed by Syria's Russian-made S-200 air defence had a crew of 15, who were all killed, Moscow said.

The Russian government stressed that the incident would have no impact on the Idlib deal but warned Israel of reprisals and summoned its envoy in Moscow.

Moscow had earlier said rockets were fired from a French frigate positioned in the same area of the Mediterranean.

"Our air defences are countering hostile missiles coming from the sea towards the city of Latakia, and a number of them have been intercepted," it said, quoting a military source.

The Syrian Observatory for Human Rights said some missiles did get through and struck ammunition depots at the site of the technical industries institute.

Rami Abdel Rahman, the head of the Britain-based monitoring group, said at least two fighters were killed and 10 wounded in the strike.

"Two bodies were found," he told AFP, adding that he could not immediately confirm whether the casualties were soldiers or militiamen from the forces supporting Syrian President Bashar al-Assad.

Israel, which did not comment on Monday evening's strikes, has conducted frequent raids in recent months against Syria's military infrastructure, including against bases it believes host Iranian combatants.

Earlier in September, Israel admitted carrying out 200 strikes in Syria over the past 18 months.

The Syrian blunder came hot on the heels of a major deal announced by Russian President Vladimir Putin and his Turkish counterpart Recep Tayyip Erdogan after talks in the Russian resort of Sochi.

The two main brokers in northern Syria agreed to create a 15-20 kilometre-wide demilitarised zone along the line of contact between rebels and regime troops in the Idlib region.

That would be achieved by October 15 and would entail a withdrawal of all jihadist fighters from the area.

The demilitarised zone will be secured with the help of "mobile patrol groups of Turkish contingents and contingents of Russian military police," Putin said.

By the end of the year, transport routes between the key port of Latakia and Aleppo as well as Latakia and the major city of Hama must be restored, he added.

Iran, the third member of the so-called Astana process aimed at ending the seven-year civil war in Syria, praised the deal as an example of "responsible diplomacy."

Damascus, which has regained swathes of territory thanks to deadly Russian-back offensives in recent months, welcomed the Sochi agreement.

The UN had warned that a fully-fledged ground assault aimed at completing Damascus's military reconquest could spark the worst humanitarian catastrophe yet in a conflict that has killed more 360,000.

Observers and residents of the Idlib region were sceptical however of a deal that appeared to be little more than a temporary fix.

"This could be a win for diplomacy and that's what Syria needs more of to solve this crisis," said Lorraine Bramwell, country director for the International Rescue Committee.

"However, we have seen previously how de-escalation deals haven't lasted long term," she added.

Hundreds of people gathered in Binnish, a town in the rebel-held province of Idlib, following Monday's announcement in Sochi.

"The demand of the Syrian people, since the very first day, has remained unchanged: it's the fall of the regime," said Wassim Souweid, one of the demonstrators.

"I reckon this decision will not stop bombardments on civilians, will not offer any alternative to the people," he added.