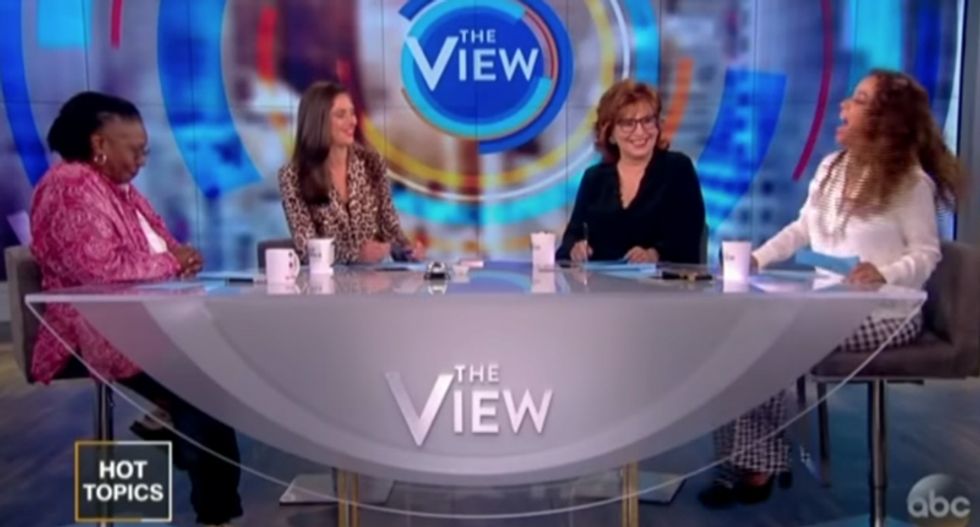 The View's Whoopi Goldberg and Sunny Hostin had the table in stitches making fun of the White House's reaction to an anonymous op-ed published in the New York Times, supposedly written by a senior staff member who's quietly leading an internal resistance against the president's more dangerous inclinations. They also had some serious thoughts about how Trump's norm-breaking is damaging the country.

"Everybody in the White House, including the First Lady, have issued denials that they wrote the anonymous op-ed about working against you know who," Goldberg began, before breaking down in laughter that was soon echoed by the audience.

"'People with no names are writing our nation's history. Words are important. And accusations can lead to severe consequences,'" Hostin added, sarcastically reading First Lady's Melania Trump's response to the editorial aloud. "They have responsibility to publicly stand by their words and people have the right to be able to defend themselves.'"

"Who wrote that, Michelle Obama?" cracked Joy Behar, referring to a notorious incident during the 2016 Republican National Convention when Mrs. Trump delivered a speech that was essentially lifted from the former First Lady.

"I recall that Melania was also a birther," Sunny added. "Weren't those words very important?"

"How about, 'I really don't care, do you?' How about those words?" Behar added.

"Does it not bother anyone that constructive criticism of a sitting president now feels like a dangerous thing to do in this country?" Goldberg asked, pivoting from making fun to making a point.

She compared Trump, "someone who wants to tear down people's legacies", to former Presidents Obama and both Bushes. "Obama took as much crap as any other president, and he took it from all sides. And he still did his job. George Bush took crap from everybody. Both Georges."

"If you don't have the cojones to take the critique that is our right, which makes us Americans, because we're supposed to be able to say 'I don't like what you're doing', without fear of retaliation," Goldberg went on, openly questioning Trump's manhood. "I mean, all that puffing up is like, 'dude, what are you doing?'"