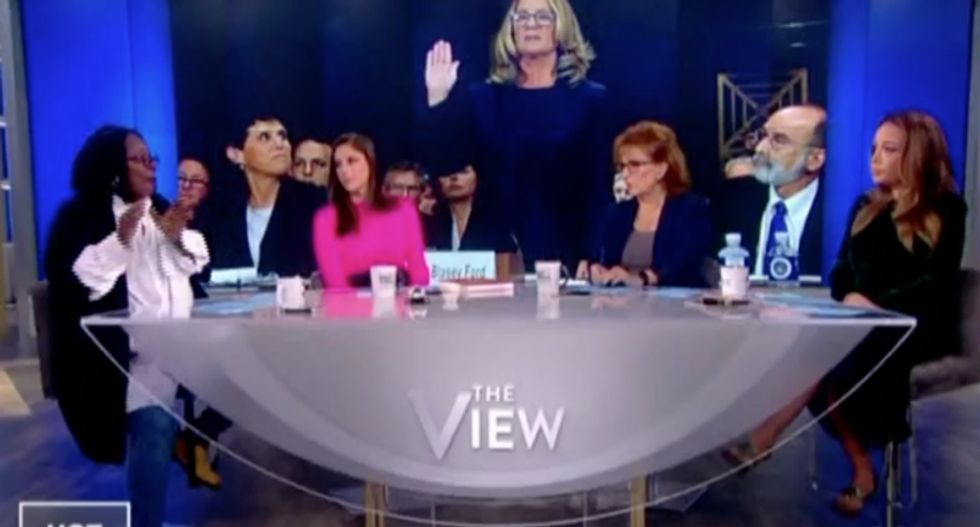 No one on Friday's episode of "The View" was pleased with what transpired at Thursday's Senate Judiciary "he said/she said" hearings on the sexual assault allegations facing Supreme Court nominee Brett Kavanaugh. Even conservative Abby Huntsman mocked his "temperament", saying a woman would have never gotten away with the screaming and crying that Kavanaugh employed.

In fact Huntsman, who typically argues in favor of the Republicans, panned the Judiciary Committee's haste to confirm Kavanaugh.

"I think there are way too many questions and way too many emotions to rush this," she said. "I thought yesterday was heart-wrenching. It was really a sad day for this country on so many levels."

And, breaking with other conservatives, she added, "I think the fact that if you find her at all credible, that is enough to say you can't push this forward. "

If Huntsman was troubled, co-host Sunny Hostin was thoroughly enraged. "Sexual assault isn't a Democratic issue, it's not a Republican issue. It's a human issue," she said. "The fact that people are falling on either side politically and drawing that line in the sand? As a former sex crimes prosecutor, I'm disgusted by it and every single American should be disgusted by it."

She also slammed Kavanaugh, saying that he didn't have the "credibility, candor, character and impartiality" to sit on the Supreme Court.

Everyone on the panel, regardless of political affiliation, mocked Kavanaugh's air of grievance.

"If you are so innocent, if you are so upset about your name being sullied, then have the FBI investigate it," Hostin said.

Huntsman agreed, saying "the temperament that we saw yesterday, I couldn't help but wonder if that was a woman up there what the response would be."