Trump, Kavanaugh and the sleazification of the conservative elite 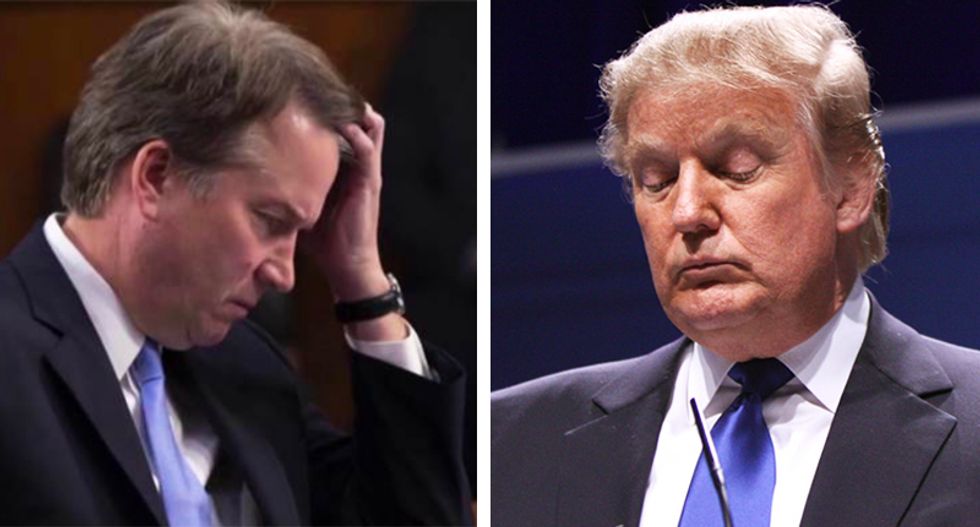 This spring, Brian Schaffner, a political scientist at UMass Amherst, published one of those studies that demonstrates empirically something that we already knew intuitively. It found that Donald Trump’s bigoted rants about Mexicans made white people more likely to express their own racism out loud.

Schaffner divided white respondents into different groups, and then showed one group a series of campaign messages that included Trump’s infamous rant about Mexico sending us their rapists. He offered a control group a series of less inflammatory campaign lines. He then asked everyone some open-ended questions about their opinions of various groups – African Americans and Latinos among them – and found that the group that heard about those bad Mexican hombres expressed significantly more bigoted opinions about all of the outgroups in the survey.

In an April interview, Schaffner told me that “there have been several psychological studies showing that people tend to take cues from their peers when they’re asked to talk about other groups. When they hear somebody saying something offensive about some group, then they basically say to themselves, ‘Oh, I can say that because this other person said it, so it must be OK.’ And I think something similar is going on here. People hear a politician who is running for president using this inflammatory terminology, and they think, ‘Well, if a major party’s presidential candidate is using this language then it must be acceptable for me.’ So I think people are changing their understanding about what the norms allow for, or preclude, based on what they’re hearing from Trump.”

I was thinking about these findings during the long, Hellish years of this week’s hearings over Christine Blasey Ford’s allegation that Supreme Court nominee Brett Kavanaugh sexually assaulted her when she was 15. Among the things that stood out about Kavanaugh’s testimony was his unbridled partisan animosity toward the committee’s Democratic Senators, especially the women, and what mainstream outlets referred to as his repeated “dissembling,” AKA lies.

If yesterday's hearing confirmed one thing, it's that Brett Kavanaugh is a serial liar about even the most casual,… https://t.co/ZjZ3YWpkWu
— Greg Sargent (@Greg Sargent)1538133525.0

Perhaps one needs to step back a bit to appreciate how far from a judicial performance it really was. Here was a member of Washington’s elite – “I got into Yale without any connections!” he screeched – who would have been far better served portraying himself as an aggrieved, decent guy, one who might become a neutral umpire calling balls and strikes. Instead, he went full Limbaugh-loving scumbag frat boy on national TV. And keep in mind that these weren’t spontaneous outbursts of emotion --- his testimony was carefully rehearsed during hours of prep at the White House.

I also thought about Schaffner’s study as I watched Sen. Lindsey Graham give up his ‘oh, shucks’ persona to rant and rave about the left’s conspiracy to destroy conservatives with what he sees as baseless charges of sexual abuse. “This only happens to Republicans,” he said, which would no doubt come as news to John Conyers, Eric Schneiderman, Al Franken, Elliot Spitzer and Anthony Weiner. But it was really the sneering tone, dripping in naked hostility for his colleagues, that stood out from a guy who’s spent his entire career posing as a happy goofball who was willing to work across the aisle.

There’s a sense, especially among NeverTrump conservatives,  that at some point, perhaps after a couple of electoral thrashings, the fever will break and the conservative movement will return to its pre-Trump reality, once again embracing international trade and multilateralism, and using racist dog-whistles rather than air-raid sirens. But I fear that, just as Trump's behavior marked a change in norms among white voters, this rich dirtbag we call the president has signaled that conservative elites can and should embrace their worst impulses.

I’m not sure that the open sleazification of bitter, affluent right-wingers is a genie that can be put back in the bottle anytime soon.

The most important story this week didn’t exactly fly under the radar, but with so much focus on the Senate Judiciary Committee, I want to make sure you caught it.

Juliet Eilperin, Brady Dennis and Chris Mooney reported for the WaPo that “deep in a 500-page environmental impact statement, the Trump administration made a startling assumption: On its current course, the planet will warm a disastrous seven degrees by the end of this century.”

One would think that this calamitous projection would spur the regime to take some action to save the planet, but these people aren’t normal.

The administration did not offer this dire forecast, premised on the idea that the world will fail to cut its greenhouse gas emissions, as part of an argument to combat climate change. Just the opposite: The analysis assumes the planet’s fate is already sealed.

The draft statement… was written to justify President Trump’s decision to freeze federal fuel-efficiency standards for cars and light trucks built after 2020. While the proposal would increase greenhouse gas emissions, the impact statement says, that policy would add just a very small drop to a very big, hot bucket.

“The amazing thing they’re saying is human activities are going to lead to this rise of carbon dioxide that is disastrous for the environment and society. And then they’re saying they’re not going to do anything about it,” said Michael MacCracken, who served as a senior scientist at the U.S. Global Change Research Program from 1993 to 2002.

Relatedly, check out Chris Mooney’s report about an arctic lake that’s been belching out clouds of methane, a greenhouse gas more potent than carbon dioxide. “The volume of gas wafting from [Esieh Lake] could deliver the climate system another blow if lakes like this turn out to be widespread,” wrote Mooney.

It’s quite possible that Trump’s legacy will be both figuratively and literally toxic.

“The Environmental Protection Agency plans to dissolve its Office of the Science Advisor, a senior post that was created to counsel the E.P.A. administrator on the scientific research underpinning health and environmental regulations,” reported Coral Davenport for The New York Times.

Meanwhile, Gregory Wallace and Rene Marsh reported for CNN that “EPA's director of children's health emailed her professional circle with a message several people who had seen it found shocking. Ruth Etzel said that without warning, she had been placed on administrative leave, a decision she… wrote was intended to undermine her office's work. The office's responsibilities include working with other EPA offices to make sure children are taken into account when regulations are written.”

“I appear to be the 'fall guy' for their plan to 'disappear' the office of children's health," Etzel wrote. "They said clearly that this is not a disciplinary action -- so it looks to me like it is intended to cause chaos in the Office of Children's Health Protection."

Who's ready for some bomb trains?!?

Timothy Cama at The Hill…

The Trump administration on Monday repealed a mandate that would have required trains carrying crude oil to use special brakes with new technology...

The mandate to phase out traditional air brakes for crude oil use was part of a comprehensive rule that the Obama administration wrote in 2015 to try to improve the safety of crude oil trains.

Transporting crude oil by rail has increased dramatically in recent years due to a boost in domestic and Canadian oil production. But with the increased traffic have come major crashes and explosions, like one in 2013 in Lac-Megantic, Quebec, that killed 47, one in 2013 in North Dakota and one in Oregon in 2016.

It's like these people don’t have kids or breath air or eat food or live anywhere near train tracks.

“A senior Trump appointee responsible for enforcing laws against financial discrimination once questioned in blog posts written under a pen name if using the n-word was inherently racist and claimed that the great majority of hate crimes were hoaxes,” reported WaPo’s Robert O'Harrow Jr., Shawn Boburg and Renae Merle.

The same three reporters followed up a few days later with a story about how the anti-discrimination official, Eric Blankenstein, has “faced open rebellion from subordinates” at the agency.

No edition of What Fresh Hell? would be complete without an item about Trump’s baby-jails.

You may recall that back in June, Homeland Security Secretary Kirstjen Nielsen implausibly insisted that the Trump regime didn’t have a policy of separating families, including families of asylum seekers, apprehended at the border.

"We do not have a policy of separating families at the border. Period," Nielsen tweeted. According to CBS, “In another tweet, she blamed ‘misreporting’ by the media, lawmakers and immigration advocacy groups for being ‘irresponsible and unproductive’ in its reporting on the controversial issue.”

This week, Open the Government and the Project On Government Oversight unearthed a memo that “provides evidence that Secretary of Homeland Security Kirstjen Nielsen signed off on a policy of family separation despite her repeated claims denying that there was such a policy…

The memo states that DHS could “permissibly direct the separation of parents or legal guardians and minors held in immigration detention so that the parent or legal guardian can be prosecuted.” It outlines three options for implementing “zero tolerance,” the policy of increased prosecution of immigration violations. Of these, it recommends “Option 3,” referring for prosecution all adults crossing the border without authorization, “including those presenting with a family unit,” as the “most effective.”

The last page of the memo contains a signature approving Option 3, but the signature—almost certainly Nielsen’s, given that the memo is addressed to her—was blacked out by FOIA officers on privacy grounds.

Do we have some positive stories to leave you with, so you don’t just log off and guzzle a gallon of vodka? We do! A couple of them, actually, both from the courts, which seems appropriate this week.

“A U.S. District Court judge restored federal protections on Monday to about 700 grizzly bears living in and around Yellowstone National Park, canceling planned hunts in Wyoming and Idaho and overturning a Trump administration finding that the iconic population had recovered.”

“In a victory for abortion-rights supporters, a federal judge struck down a Kentucky law that had put the state's last abortion clinic at risk of closing when Gov. Matt Bevin's administration cited it in a licensing fight with the facility. U.S. District Judge Greg Stivers, in a long-awaited ruling, said Friday that the two-decade-old law violates constitutionally protected due process rights.”