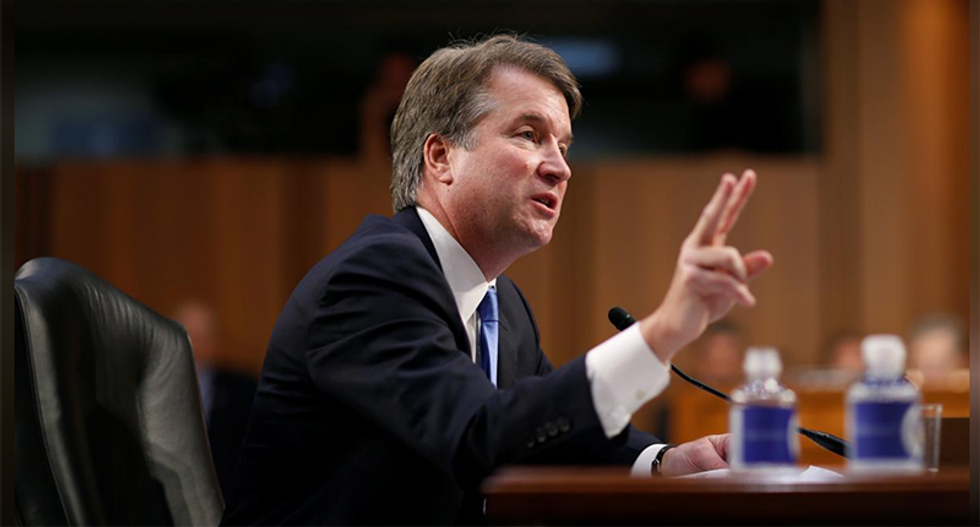 President Donald Trump on Wednesday said he could withdraw his support for Brett Kavanaugh depending on the testimony in a high-profile Thursday hearing into multiple accusations of sexual misconduct against the Supreme Court nominee.

Trump defended Kavanaugh, now a federal appeals court judge, at a New York news conference, but the president’s comments injected another note of uncertainty into Kavanaugh’s already troubled bid for a lifetime appointment to the nation’s highest court.

“You know, believe it or not, I’m going to see what’s said” at the hearing, Trump told reporters.

A third woman has accused Kavanaugh of aggressive sexual behavior in the 1980s. The nominee has vehemently denied all of the allegations ahead of the Senate Judiciary Committee hearing coming up on Thursday where one of his accusers, Christine Blasey Ford, will also testify to senators.

Trump dismissed the allegations against Kavanaugh as a “big fat con job” orchestrated by Democrats. He did not say that Kavanaugh’s female accusers were lying.

“I can always be convinced,” Trump said. “It will be interesting to hear what she has to say.”

Trump himself has faced multiple accusations of sexual misconduct. He said this has shaped his view of the allegations against Kavanaugh.

“I’ve had a lot of false charges made against me,” he said. “When I see it, I view it differently than someone sitting home watching television where they say, ‘Oh, Judge Kavanaugh this and that.’”

Blasey Ford will tell the committee a “visibly drunk” Kavanaugh and a friend locked her in a bedroom at a party in a Washington suburb in 1982, when she was 15 and he was 17, according to testimony released ahead of the hearing.

Blasey Ford says Kavanaugh climbed on top of her, tried to take off her clothes, and put his hand over her mouth when she tried to scream for help.

“It was hard for me to breathe, and I thought Brett was accidentally going to kill me,” her testimony says.

Kavanaugh will deny all of the allegations but will tell the committee that he was “not perfect” in high school.

“I drank beer with my friends, usually on weekends. Sometimes I had too many. In retrospect, I said and did things in high school that make me cringe now,” he said in testimony released on Wednesday.

Earlier in the day, she said she attended more than 10 house parties in the Washington area from 1981 to 1983 where Kavanaugh was present. She described gang rapes she said occurred in which boys would line up to rape incapacitated girls.

“In approximately 1982, I became the victim of one of these ‘gang’ or ‘train’ rapes where Mark Judge and Brett Kavanaugh were present,” she said, mentioning the name of a close friend of Kavanaugh. She did not identify her attackers and did not accuse Kavanaugh of taking part.

“During the incident, I was incapacitated without my consent and unable to fight off the boys raping me. I believe I was drugged using Quaaludes (a sedative) or something similar placed in what I was drinking,” she said.

She also said she witnessed efforts by Kavanaugh and others “to cause girls to become inebriated and disoriented so they could then be ‘gang raped’ in a side room or a bedroom by a ‘train’ of numerous boys,” adding she remembers boys including Kavanaugh getting in lines to take part in these rapes.

She did not identify the individuals directly involved in those assaults.

Kavanaugh said in a statement released by the White House, “This is ridiculous and from the Twilight Zone. I don’t know who this is and this never happened.”

Reuters was not immediately able to verify her accusations.

Swetnick is represented by lawyer Michael Avenatti, who also represents adult film star Stormy Daniels in a lawsuit against Trump to void a nondisclosure agreement under which the president’s former personal lawyer paid her $130,000 not to discuss her alleged relationship with Trump years ago.

Swetnick and Avenatti did not immediately respond to requests for comment.

An attorney for Judge said he denied Swetnick’s allegation.

On Twitter, Trump called Avenatti “a total low-life” and “a third rate lawyer who is good at making false accusations.”

In an interview with Fox News on Monday, Kavanaugh was asked whether he ever participated in or was aware of any gang rape at a party he attended. “That’s totally false and outrageous. I’ve never done any such thing,” he responded.

Another woman, Deborah Ramirez, has accused Kavanaugh of exposing himself during a drunken dormitory party during the 1983-84 academic year when both attended Yale University. Kavanaugh has denied that allegation as well.

Republican staffers on the committee also asked Kavanaugh about two other incidents involving alcohol and sexual behavior, according to a transcript of an interview released on Wednesday. Kavanaugh told staffers they did not take place, and nobody has come forward to speak publicly about them.

Supreme Court appointments must be confirmed by the Senate. Trump’s fellow Republicans control the chamber by a narrow 51-49 margin. So, Republican defections could sink the nomination.

The fight over the Supreme Court has been unfolding just weeks ahead of the Nov. 6 congressional elections in which Democrats will seek to take majority control of the Senate and the House of Representatives from the Republicans.

Trump chose Kavanaugh, a conservative appeals court judge, for the court in July, after the retirement of Justice Anthony Kennedy. If confirmed, Kavanaugh would cement conservative control of the court, as Trump moves to shift the high court and the broader federal judiciary to the right.

A committee vote on the nomination was expected on Friday, with a final Senate vote on Tuesday.

“STRIPPING PEOPLE OF THEIR HUMANITY”

Republican Senator Chuck Grassley, the Judiciary Committee’s chairman, said the hearing will go forward as planned and that the panel’s staff is looking into Swetnick’s allegations.

Senate Democratic Leader Chuck Schumer and all the Judiciary Committee’s Democrats called on Kavanaugh to withdraw in light of the allegations, and said if he does not, an FBI investigation is needed before any Senate confirmation vote.

The pitched battle over Kavanaugh added to perceptions of Washington as paralyzed by partisan rancor.

Senator Jeff Flake, a moderate Republican, issued a plea for civility. “We sometimes seem intent on stripping people of their humanity so that we might more easily disregard or defame them and put them through the grinder that our politics requires.

“We seem, sometimes, to even enjoy that,” Flake said.