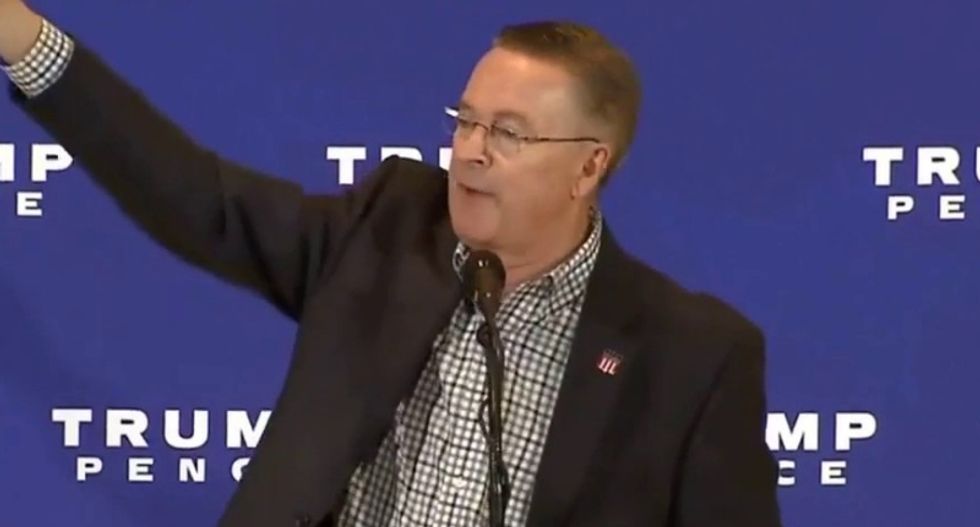 Congressman Rod Blum (R-IA) speaks to a crowd at a Trump rally in 2016. Image via screengrab.

The House Ethics Committee has opened an investigation into Iowa Republican Rod Blum — a congressman considered to be one of the "most vulnerable" in the House.

Roll Call reported Tuesday that the committee is looking into allegations raised by a February Associated Press report claiming Blum's top staffer was featured in a fake testimonial for a company he owned and failed to disclose on his financial disclosure forms.

Along with issuing a statement announcing its investigation, the House Ethics Committee also published a document Tuesday "clarifying" the House's guidelines on members personally endorsing or promoting "organizations, products, or services where they have a financial interest."

The report noted that the congressman called the investigation a "crusade of personal destruction" from the "radical left."

"In my case they scream ‘ETHICS VIOLATION!’ over a clerical error on a form," Blum wrote. "Once this minor error was brought to my attention, I immediately self-reported to the Ethics Committee and apologized."

Last week, Politico reported that the National Republican Congressional Committee is considering cutting off funding to "lost cause" candidates — and Blum was considered chief among them.

Over the weekend, American Ledger also reported that the Iowa Republican is allegedly a moderator of the same conspiracy-filled "Tea Party" Facebook group as Florida gubernatorial candidate Ron DeSantis.

After the report about the Facebook group was published and the AP requested comment about it, Blum tweeted the name, phone number and email address of the same reporter who wrote about his alleged ethics violation in February, Splinter reported.

Even after President Joe Biden was inaugurated, coup-memo John Eastman was still attempting to overturn the election in fealty to former President Donald Trump according to a bombshell new report.

"John Eastman, the conservative lawyer whose plan to block congressional certification of the 2020 election failed in spectacular fashion on Jan. 6, 2021, sent an email two weeks later arguing that pro-Trump forces should sue to keep searching for the supposed election fraud he acknowledged they had failed to find," The New York Times reported. "On Jan. 20, 2021, hours after President Biden’s inauguration, Mr. Eastman emailed Rudolph W. Giuliani, former President Donald J. Trump’s personal lawyer, proposing that they challenge the outcome of the runoff elections in Georgia for two Senate seats that had been won on Jan. 5 by Democrats."

Joseph Cuffari, the Dept. of Homeland Security Inspector General who neglected to timely inform Congress of losses of data on cell phones of Secret Service agents and DHS officials during the lead up to and the day of the 2021 insurrection was the subject of a report that found he violated ethics guidelines.

Cuffari "previously was accused of misleading Justice Department investigators and running 'afoul' of ethics regulations while he was a federal agent in charge of a DOJ inspector general field office in Tucson, according to a newly disclosed government report," The Washington Post reports Wednesday evening.